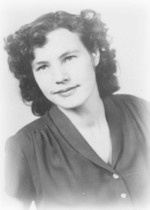 Zelda Mae “Dolly” Coykendall Richard was born December 21, 1922 in Grand, Oklahoma to Myron Earl and Katie Louella (Westell) Coykendall. Zelda was the youngest of five children, with having four older brothers: Calvin, Truman, Vern, and Monty. After having only boys Zelda loving father call her Little Dolly. Dolly was the name that she would go by to all who knew her. Dolly started school at Pinkston Rural School near her home in Grand, Oklahoma before transferring to the Arnett Schools in Arnett, Oklahoma, where she continued her education. At an early age Dolly gave her life to the Lord. She attended church services in the communities where she lived. Dolly was a member of the Arnett Basketball Team. Dolly grew up in rural Ellis County, Oklahoma where she loved the outdoors. Dolly loved spending time swimming the South Canadian River and the creek on the family farm. Dolly loved riding horses and spent many hours riding the pastures with her neighborhood friends. It was while Dolly was attending high school that she met the Love of her Life. One day while she and a friend were walking down the street, she saw a dark headed cowboy named Rollin Charles “Pat” Richard. Dolly told her friend, “I’m going to marry that guy.” On May 14, 1939 Dolly and Pat were married in Harmon, Oklahoma. To this union five children were born Patricia Ann, Marilyn Sue, Richard Michael, Barbara Jo, and James Robert. Dolly and Pat spent their early lives farming and operating a "Grade B” Dairy. They also operated a café for a short time during WWII. In 1948, they moved into Arnett, to operate the “Hotel”, during this time Pat worked for the Oklahoma Highway Department and it was Dolly who operated their business and saw to the needs of the children. Dolly taught all of her children how to swim and took them swimming whenever possible. In the fall of 1953, they made the move to Buffalo as Pat’s job requested. She would spend the next 31 years in the Buffalo and May communities where she made many friends. Dolly was a member of the bowling league and she also enjoyed playing golf. Dolly was a wonderful cook, sewed for her family and taught us to remember who we were. If any of us said “I can’t” she quickly replied: "You can if you really want to.” She instilled in us a desire to work for what we wanted and strive to obtain our goals. Dolly was an Avon sell representative, winning many Avon awards.  She also enjoyed gardening and was especially proud of her Roses. Dolly had many interests. She lovingly crocheted afghans for each of her children and grandchildren. Dolly was a member of the Home Demonstration Club and enjoyed meeting with and taking little trips with the ladies in the “Arnett Social Club”. In 1984, at Pat’s retirement they moved to their “Retirement Ranch” south of Harmon. Dolly and Pat enjoyed raising Registered Paint Horses. Dolly and Pat enjoyed traveling and visiting many of the states. Dolly also enjoyed a trip around the county on an afternoon drive. Dolly and Pat were a member of the Cowboy Story Tellers Association. After the passing of Pat, Dolly returned to Buffalo where she continued attending the events with the Cowboy Story Tellers Association. Dolly spent her Wednesday’s with the “Domino Girls” playing Mexican Train, and she would always call let us know when she had won. Dolly enjoyed spending time with the Red Hat Ladies. Dolly enjoyed “County Music”, she would sing along with the radio as she did her work and her children remember singing as they made trips in the car. She especially enjoyed the “Grand Ole’ Opry” and watching the re-runs on RFD. Bus trips to Branson, to see some of her favorite singers was a highlight for Dolly.

Dolly was preceded in death by her parents, her loving husband, her four brothers and one Great Great Grandson.

Funeral Service will be Tuesday, January 25, 2011 at 2:00 PM at the Harmon Nazarene Church in Harmon, Oklahoma with Pastor Bert Cutsinger officiating , Painist Lelia Cutsinger with Music Leader Les Castor, “Amazing Grace” In the Garden: and “I Saw the Light” with the Congretation singing. Burial will be in the Harmon Cemetery. Family suggest, memorials to the Harmon Nazarene Church and American Cancer Society, in care of c/o the Wilkinson Funeral Service, Box 302, Buffalo, Ok 73834

Please click here to view the video tribute
To send flowers to the family in memory of Zelda (Dolly) Richard, please visit our flower store.