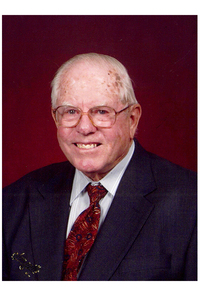 Wilford D. Waugh, the second son of Inez Edna (Shuman) and James Henry Waugh, was born on January 16, 1923, in the half dugout 5 miles northwest of Doby Springs, Oklahoma.  He attended grade school at the Union Center District No 26 and graduated with the class of 1942 from Buffalo High School.  Wilford attended all 4 years without being absent or tardy.  He farmed with his father before entering the army.  He was assigned to the 30 th Infantry Division (Old Hickory) as a Rifleman.  At this time he became a Private First Class.  Among the awards Wilford received were The Combat Infantry Badge, The Bronze Star, and The Purple Heart.  After the War in Europe, he returned to the United States and became a Clerk Typist and typed medical forms and army discharges.  His final duty in the army was that he typed his own Honorable Discharge.  Wilford a long time member of the Rosston Methodist Church; worked as a farmer and rancher, raising registered Hereford Cattle, wheat and alfalfa.  He was married to Marian Terrill in 1947.  They had three children, two daughters, Janice and Dianne, and one son, Troy.  Wilford served on the Rosston School Board, The Board of Directors of the Oklahoma Crop Improvement Association, and a long time Inspector on the Lone Tree Precinct Election Board.  He enjoyed taking his family on trips to the north and northwest United States, visiting relatives and different parks.  Wilford and Marian attended many of the 30 th Infantry Division (Old Hickory) Reunions both Regional and National.  Wilford and Marian also went on a tour with the 30 th Infantry Division (Old Hickory) in the area where the Division served during World War II in Europe.  Wilford and Marian moved to Buffalo in December 1995.  Wilford loved going out to the farm and helping.  Wilford went to be with the Lord on Monday, August 26, 2013, at the age of 90 years, 7 months, and 10 days.  Wilford was preceded in death by his parents, a brother Meredith, an infant granddaughter & an infant grandson.  Wilford is survived by his wife Marian, his two daughters, Janice Goodman & husband Danny; Dianne Bentley & husband L.D.; & son Troy Waugh.  Grandchildren Shelly Prather & husband Sjohn; Travis Cook & wife Shelley; Brian Cook & wife Carriann; Ginger Cox & husband Mark; Staci Short; Daniel Goodman & Lisa; Great Grandchildren Darby, Cameron, Victoria & Isabella; Kyrstan, Daisy & Jett; Ashlynn, Hallie & Cecily; Tyler & Gage; Rayven, Garrett, Cybil & Jordan; & his surviving brother, Eldon & sister, Ivalee Brock & husband Basil; many, many life time family & friends.  The Waugh family has suggested memorials to the Rosston United Methodist Church or to the Pleasant Valley Cemetery.

Please click here to view the video tribute
To send flowers to the family in memory of Wilford Waugh, please visit our flower store.