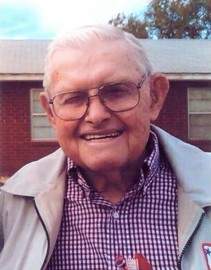 Leslie Warren Smith, known as Warren, the son of Samuel Leslie and Gladys O’Dessie (Taylor) Smith, born on May 27, 1924 on the family farm, Selman, Oklahoma.  The family moved to Diamond, Missouri when Warren was a baby and returned to the family farm when Warren was 13 years old.  Warren attended Selman Schools from 7th through 10th grade.  As a teenager Warren left for Missouri to help build the Prisoner of War Camp at Neosho, Missouri.  He learned many carpentry skills that he used later in life.  On September 19, 1942 Warren and Bonnie A Miller were married and to this union 4 children were born Larry, Terry, Billy, and Marilyn. Larry their first son was born before he enlisted in the US Army on April 21, 1944.  Warren arrived in England on the Queen Mary, being in the infantry he fought on the front lines through France, Czechoslovakia, & in the Battle of the Bulge. While in Germany his company was responsible for freeing prisoners from one of the death camps.  In 1946 he received an honorable discharged at the rank of Sergeant, he was extremely proud of his military service.  Warren worked many jobs helping the local farmers, including driving cattle to the railroad yard at Lovedale.  Warren farmed, custom harvested, operated a Grade A Dairy for 29 years and worked for the Harper County District #3 until he retired in 1989. Warren then went to work for CBS Construction operating heavy equipment. Later working for Bob Selman Construction crushing rock.  If Warren had a hobby it was visiting with friends and neighbors. Many times his kids thought working was his hobby. He could fix anything with a pair of pliers and bailing wire. Warren could still work circles around anybody and everybody well into his 80’s.  He was always generous with his time to help out his friends and neighbors.  All who knew him learned from his abundance of knowledge. Warren was preceded in death by his parents, wife; Bonnie, sons; Terry Lee and Larry Eugene, brothers; Edward, Rondal, Royal, Roland, and Robert, sisters; Esther and Lucille, a great-granddaughter, a great-great granddaughter; numerous nieces, and nephews.  Warren left his earthly home on October 30, 2017 at the Baptist Burn Center in Oklahoma City, Oklahoma. Warren is survived by his daughter Marilyn McGuire of the home, son Billy and wife Beverly Smith of Prague, brother Sherman Smith of Wimauma, Florida; sisters Ethel Richardson of Lawton, Oklahoma, Ronda Ashby of Tampa, Florida, and Ronita Green of Sarasota, Florida, 11 grandkids, 30 great grandkids, 6 great great grandkids, 2 great great great grandkids, and special son Ron and wife Nona Lake, many other family and friends.  Warren was a man of great character and will be missed by many .

To send flowers to the family in memory of Warren Smith, please visit our flower store.