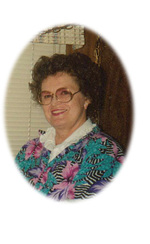 Wanda Lou (Chase) German was born April 7, 1930 to Robert and Ella (Leebrick) Chase at  the Treadway place close to Lodge Pole Creek.  She was delivered by her aunt and local midwife, Eva Ransom, who became her loving caregiver at age 12 after the rest of the family relocated to California.

Wanda developed natural musical talent at a very young age and taught herself to play the piano.  She loved singing and playing and was featured on a local radio program as a young girl.

Wanda attended school in Buffalo where she was known for her sense of humor and beautiful smile.  After graduating from High School, she became a switchboard telephone operator and told stories of keeping her ever-calm head during the Woodward tornado to dispatch emergency help.  She always had an interest in community safety and continued educating herself in the area of community defense and received a special certificate from civil service medical division.

In 1949, Wanda was swept off her feet by a handsome young solider returning from the war. She and Bobby German who had been long-time Paruna neighbors were married September 4, 1949 at the home of Eva Ransom.   Their romance continued through building themselves a home, the hard work on the family farm and the challenges of raising children for 62 years.

Bob and Wanda lived in their Paruna home their entire lives and were especially proud that she was an “original Okie.  She and Bob supported the Paruna Baptist Church until it was moved.  They continued their service to the Lord at the First Baptist Church of Buffalo where they have been long-time members.  She continued her love of music by inspiring her children and providing music in the home and at the church.

Wanda was the consummate hard-working farmer’s wife, serving many meals a day for kids and workers, driving farm machinery, making all the fancy prom dresses and quilts and turning out some of the best pies ever produced in Harper County.  Wanda Lou (Chase) German peacefully departed this world to live with the heavenly Father on June 6, 2012.

Wanda was preceded in death were her parents and brother Louis Chase. Wanda is survived by her beloved husband Bobby of Paruna, children Sherry German of Friendswood, TX, Randy  (Nona) German of Soldier, KS and Sally German of Pensacola, FL and a brother Charles Chase of Palm Springs, CA.  Included in their beautiful family are four grand-children, Clint Casperson of Friendswood, TX, Katie Casperson of Pensacola, FL, Carrie Holiday of Solider, KS and Rob German of Brooklyn, NY.  and three great-grandchildren.

Please click here to view the video tribute
To send flowers to the family in memory of Wanda German, please visit our flower store.