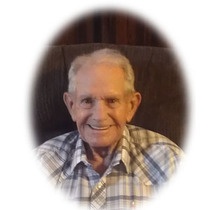 Walter Dean Young, was born on June 11, 1931, in Ashland, Kansas, to Jesse and Ida Matilda (Miller) Young and passed on to his heavenly home on Sunday, October 18, 2015, at the age of 84 years, 4 months, and 7 days. Walter Dean was lovingly known as Walt, Walter D., W.D., and Brigham, by all those who knew and loved him.   Born and reared in Ashland, Kansas, Walter Dean was the youngest of five children born to Jesse and Tillie. One to always have fun, Walt enjoyed the time he spent working with family on the farm or while playing at the creek or shooting marbles with his friends. While attending school at Ashland High School, Walt excelled at athletics. Due to the success that he had playing football for the Ashland Blue Jays, Walt was offered and accepted a full ride scholarship to Dodge City Community College where he played football for two years.     After his time in college, Walt enlisted into the Army along with four of his close friends from Ashland. Attending basic training at Camp Chafee, Arkansas, he was trained in artillery and was later named a battery commander while stationed in Germany.  While there, Walt also continued playing football, participating in an Army league for his post. During his time at his duty station in Hammelburg, Germany, Walt was recognized by his commanding officer when he was chosen to attend Army College to further his military training and career.  While this was a wonderful honor and opportunity, Walt was always one to put his family and responsibility first and he let this lifelong dedication govern his decision. Walt respectfully declined the offer, allowing him to go home to Ashland where he could help his ailing father run the family farm.    It was soon after his return that Walt met and married Reta Mae Waugh. Son Stanley Dean was born the following year and the young family made their home in Ashland. Farming while facing difficult drought conditions, Walt decided to try his hand at oilfield work. This new profession moved Walt and the family to Buffalo, Oklahoma, where two daughters, Darenda Lea and Dayla Sue were later born. It is in Buffalo that Walt and Reta made their lifelong home, and raised their family. Walt dedicated his life to his family in many ways, but his strong work ethic and constant support of his children and Grandchildren spoke to this dedication above all. His daily efforts in developing and operating his businesses along with the time he spent volunteering his time and talents to the community's youth through his involvement with the Quarterback Club and Kids' Inc. are a true testament to who he was as a man.  After more than 50 years in the oilfield, Walt stopped working seven days a week and began his much deserved retirement in 2006.  Walt spent his time doing the simple things that brought him much joy. He returned to gardening, sharing the bounty of his harvest with family and friends. His sharp mind and quick wit were kept active working puzzles, discussing politics, and keeping up on current events. His lifelong interest and love of sports was shown through his avid watching of golf, football, basketball, and baseball games on the television. Most importantly, however, Walt took great pride and joy in his ability to attend the activities and events that all of his grandchildren participated in. He was their number one fan and lifelong supporter. He thoroughly enjoyed visiting his kids and grandkids, as well as the little bit of traveling that he and Reta shared with family.    Walter Dean was preceded in death by his parents, Jesse and Tillie, his brothers Bill, Kelsie, and Loy Earl, his sister Mary Matilda, and his niece Marvel (Young) Wooley. He leaves as his survivors his wife of 61 years, Reta Mae, son Stan and his wife Darla, of Buffalo, daughter Darenda Lea and her husband Jeff Berryman, of Ashland, Kansas, and daughter Dayla Sue and her husband Steve Ahrens of Wichita Falls, Texas, and his seven grandchildren who he truly adored, Jesse, Brittany, Timothy, Sarah, Joshua, Katie, and Emily. Walt will be fondly remembered by all of those who knew him as a man who showed fairness to all, always recognizing that each individual deserves an opportunity in this life. His firm handshake, his smile, his encouraging word, his help for a neighbor in need, and the wink of his eye will always be remembered. The memory of his generous and loving spirit will live forever in the hearts of those who knew and loved him. Walt lived and left this life with immense pride in his family, and his legacy lives on through those that he held most dear, his children and grandchildren. He will be forever held in their hearts.

Please click here to view the video tribute
To send flowers to the family in memory of Walter Young, please visit our flower store.