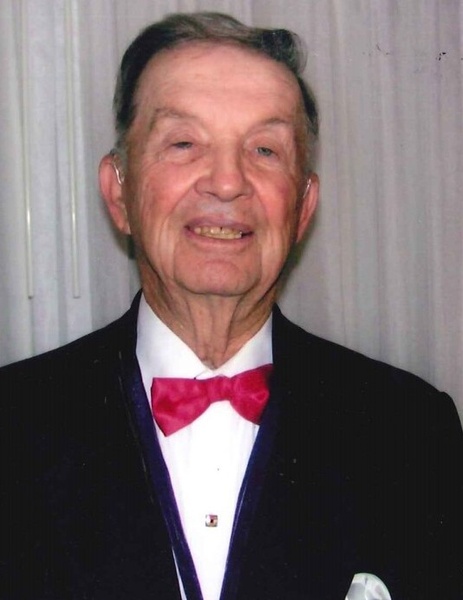 Walter Wayne Roberts was born on March 27, 1924, in Buffalo, Oklahoma, the second of five children born to Archie and Ellen Roberts. Walter grew up in Buffalo graduating from Buffalo High School and then attending Oklahoma A & M College (Oklahoma State University). While a student at Oklahoma A & M, he enlisted in the Army in the fall of 1942. He was sent to Europe as an infantryman and was captured during the Battle of the Bulge. After 6 months as a Prisoner of War, he was honorably discharged and returned to Oklahoma to complete his degree in Ag Economics at Oklahoma A & M. It was while he was finishing his degree that he met his future wife, a tall, fiery redhead named Betty Ann Hammons. Walter and Betty were married in Pond Creek, Oklahoma, on January 29, 1949. Shortly after, they moved to Buffalo to make their home and begin a farming/ ranching operation. Buffalo was their home for 46 years. It was here that they raised their 3 daughters: Teresa Lynn, Patricia Ann, and Cynthia Lou. Sadly, on November 11, 1995, Betty succumbed to cancer and so began another chapter in Walter’s life. After a respectable grieving period, several of Walter and Betty’s friends realized it was time for Walter to get back out among the living. They invited him to join them on their weekly trips to Woodward to attend Western Swing dances at the Elks Club. It was at one of these dances that another redhead entered his life, Jo Ann Wilson. They were married on April 4, 1998. For the next 22 years they became involved with the Shriners, attending many of their functions and also joined the Western Swing dance organization, dancing their way throughout Oklahoma, Arkansas, Texas and Kansas. Walter remained a life-long member of his fraternity, Alpha Gamma Rho, maintained his membership with the Shriners and was a 32-degree Mason. He was also a member of the Elks club and VFW in Woodward, Oklahoma. In his twilight years, Walter was so appreciative, to be able to take the Honor Flight to Washington DC with over 100 other Oklahoma veterans from World War II. This trip meant so much to him. Walter died in Oklahoma City from complications of Covid-19 on January 7, 2021, at the age of 96. He was preceded in death by his parents, Archie and Ellen Roberts, his first wife, Betty Ann Roberts, his sister, Verna Jean Barth, his brothers-in-law, John Barth, Robert Beck, and John Russell, and a stepdaughter, Glenda Arndt. He is survived by his wife, Jo Ann, and his daughters: Teresa Lynn Roberts of Edmond, Oklahoma, Patricia Ann Mehlman (Harry) of Tucson, Arizona, and Cynthia Lou Adkins (Sam) of Oklahoma City. He is also survived by his 3 sisters: Corinne Beck, Orma Lee Cotter (Dexter), and Avis Russell; his grandchildren: Angela Neel Gallop (Greg Ayers) of Fresno, CA, Brandon Neel (Dorinda) of San Antonio, TX, Brent Adkins (Michelle) of Luling, LA and Samantha Adkins Pearce (Brent) of Edmond, OK. He is also survived by 5 great grandchildren: Alexander & Alexia Neel and Cole & Addison Adkins and Natalie Bawden, 4 stepchildren: Billy Wimmer (Sandy) of Freedom, OK, Charley Wimmer of Midland, TX, Larry Wimmer (Debbie) of Mobridge, SD and Sharry Thompson (Brad) of Hutchison, KS, as well as nieces, nephews, extended family members and many dear friends. Graveside services will be held at 2:00 p.m. on Wednesday, January 13, 2021, at High Point Cemetery in Buffalo, Oklahoma, under the direction of Wilkinson Funeral Home, with Reverend Jerry Hodges officiating. In Lieu of flowers the family request Memorials, may be made to Folds of Honor-Oklahoma City chapter (719 N County Line Rd, Tuttle OK 73089) or St Jude’s Children’s Hospital.

To send flowers to the family in memory of Walter Roberts, please visit our flower store.