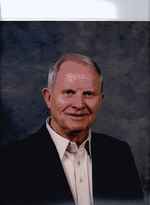 Walter L Huffman, 87 year old former resident of Laverne and current resident of Enid, died Wednesday November 7, 2012 in Buffalo. Funeral services will be held at 11:00 a.m. Saturday, November 10, 2012 in the First United Methodist Church of Laverne with Reverend Darren Mann officiating. Burial will follow in the Laverne Memorial Cemetery. Military graveside rites will be conducted by the Laverne American Legion. Arrangements are under the direction of the Wilkinson Funeral Home, Buffalo. Walter Lemuel Huffman, the oldest child of Jess and Mae Huffman, was born July 8, 1925 in Buffalo, Oklahoma. He passed from his earthly home November 7, 2012 in the Harper County Community Hospital at the age of 87 years 3 months and 31 days. Walter, or as he was known to most as Huffy, grew up in the community of May, Ok. He attended May school and received his Eagle Scout Badge during these years. While in school Huffy was an outstanding athlete who competed in many sports. Like many in his generation he heard the call to duty and joined the army on August 26, 1943 at the young age of seventeen.  While at basic training the army found out that he was an outstanding basketball player and they sent him to a clerk typist school so that at the same time he could play on the base basketball team. In 1944 there was a need for replacements in the European theater and one of the biggest needs was for combat medics. When the army found that Huffy was an Eagle Scout they knew he must have basic first aid training and determined he was capable of being a combat medic. He then had a short training period and shipped out on September 1, 1944. He arrived in France on October 1, 1944 as a member of the 45 th division 171 st infantry 121 st medical unit. Huffy participated in the Southern France Campaign and the Rhineland campaign as a combat medic. He was wounded for a second time as allied forces were moving into Nuremburg on April 16, 1945; this wound caused by multiple bullets required the amputation of his left arm. The war ended just two short weeks later. He was awarded the Purple Heart with Oak Leaf Cluster for his wounds received while serving in action. On February 14, 1946 he was honorably discharged from the Army. Huffy was united in marriage to Faye Charlene Walter of Selman on February 1, 1944. After Huffy’s discharge the couple made their first home in Woodward. On March 4, 1946 Huffy and Faye welcomed their only daughter Connie Charlene into their family. While in Woodward Huffy had various jobs, one was working in a tire shop, which was difficult when you only had one arm. One day while on his lunch break he came in and told Faye he had been thinking and this was his plan, “I am going to get my GED and go to college. Are you going to go with me?” The family moved to Alva shortly after and Huffy began school. In just three years he graduated with his bachelor’s in history. While in school in Alva he served as a student assistant coach. After graduation the family moved to Laverne Ok in the summer of 1956.

Laverne is where he started his teaching and coaching career. While over the years he coached all sports it was girl’s basketball that was what he enjoyed coaching the most. In 1963 he was one of the founding members of the Oklahoma Girls Basketball Association. He had four teams that went to the state tournament and one that made it to the state finals in 1964. In 1966 he was selected to coach the girls all state game. In 1977 he was inducted into the Oklahoma Girls basketball Coaches Association hall of fame.

In 1970 he retired from coaching and became the full time high school counselor. While as the counselor at Laverne he instituted the Laverne All College Night which is still being used to this day to benefit the students of Lavern High School.

Huffy was a devoted husband, father, grandfather, and friend. He enjoyed being around his family and cherished memories of his old golfing buddies and a special group of friends that call themselves, “the old settlers”. This special group of people became a family, helping to raise each other’s children and grandchildren. They were a part of a different generation known as “the greatest generation”.  There is a quote by Edmund Burke that says; “The only thing necessary for the triumph of evil is for good men to do nothing.” John Hart, Huffy’s grandson says that the first time he heard this quote it reminded him immediately of his grandfather, which he calls “Pop”. “He and a generation of men like him were called to duty to fight against probably the most evil human force in history. Because of my Pop and others like him they were able to preserve not only our way of life but helped restore basic human rights throughout much of the world. These men were good men and they were heroes and I’m proud to be the grandson of a man who was part of this generation.” A trait of this great generation is the ability to overcome any obstacle and Huffy was living proof of this. Even after losing his arm at the young age of 19 he never let that stop him from enjoying life’s many pleasures. One of his favorite past times was playing golf. He was even able to make a “hole in one”.

Memorial contributions may be made to the Laverne Cemetery Association or Laverne American Legion.

Please click here to view the video tribute
To send flowers to the family in memory of Walter Huffman, please visit our flower store.