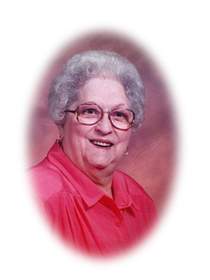 Violet Helen Dempsay was born March 8, 1930 in Broken Arrow, Oklahoma to Frank and Malenda (Scott) Dempsay.  Violet attended Broken Arrow Schools until the 8th grade and began working to help support her family.  Violet and Leonard Brown were united in marriage in 1949, they moved to Okmulgee, Oklahoma in 1950, where Violet was the owner of the Juliana Restaurant for 25 years.  During this time Violet and Leonard had two children Julia and James.  Violet sold the Restaurant and went to work for George Nigh Rehabilitation Center.  Leonard passed away in 1972. Violet later married Richard Newby in 1974 making their home in Okmulgee, Richard passed away in 1977.  Violet retired from the George Nigh Rehabilitation Center.  She move to Buffalo, Oklahoma in 1999 to be closer to her daughter and son-in-law.  Violet attended the First Baptist Church, until her health would no longer permitted her to attend.  Violet enjoyed cooking food, baking pie for the church functions.  She spent her time at home sewing, quilting, and embroiling, also enjoyed taking care of Cheyenne and Gigi, her granddaughter and making more pies.  Violet was preceded in death by her parents, husbands; Leonard Brown 1972 and Richard Newby 1977, a Daughter-in-law Linda Brown 2012, brother Eugene Dempsay 2016 and her sister Illene Nichols 2016. Violet went to be with her Lord and Savior on Monday, May 23, 2016 at the age of 86 years, 2 months and 15 days.  Violet leaves as her survivors daughter Julia and Gary Hinther of Buffalo, Oklahoma, son James Brown and the late Linda Brown, of San Tan Arizona, Nephew Gene Cox and wife Margie, grandchildren are Tyson & wife Rozanne Hinther and their children Landan & Cody; Jessie & wife Valerie Hinther  and their children Caden Hinther, Trenton Krathy, and Kyndal Krathy, two granddaughter Gigi and Cheyenne Brown, other relatives and many friends.

To send flowers to the family in memory of Violet Newby, please visit our flower store.