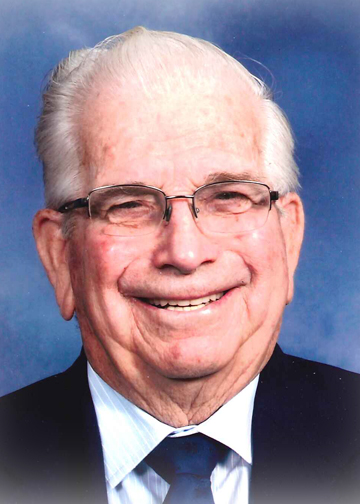 Born during the Great Depression and the Dust Bowl Days, Victor Leroy Terbush came in to this world on March 4, 1934 (3/4/34).  He was born on the family farm just outside of Gate, OK to Fearing Howard “Terby” and Tessie Beatrice (Caldwell) Terbush.   Victor attended Buffalo Schools except for a short time when he attended school at Rosston   He loved all sports and participated in football, basketball, track but baseball was his favorite. During his senior year Buffalo started an FFA chapter.  Victor was honored to be elected as the first president of the new charter!  Upon graduating from Buffalo High School in 1952, Victor attended PAMC (Panhandle State University).  While at PAMC, Victor met the love of his life, Arlene Blaine and after knowing each other 6 months, they were married on June 4, 1955 at the Lenora Methodist Church.  They returned to college for Victor’s senior year where he was chosen as the student body president, which he considered one of his greatest honors. Upon graduation in 1956, he enlisted in the United States Naval Reserves.  He was stationed at the Hutchinson Naval Training Base.  While in the Navy, their first two children were born:  Janet Lynn and Victor Leroy II.  Upon his discharge, the family moved to “The Farm” located north of Rosston.  This would be their home for the rest of their lives.  With 160 acres and a dairy barn, the Terbushs became Grade A dairy farmers from 1958-1972.  During this time Nancy Jean and LuAnn Elaine were born.  In 1972, the Terbush family was awarded, “Oklahoma’s Farm Family of the Year”. After selling the dairy, they began a farming and ranching operation. In 1996, they started “Paw Pals”, a kennel with 125 adult breeding dogs.  In 1999 at the age of 65, when Arlene’s health began to decline, Victor retired from farming but continued to operate the kennel. After selling “Paw Pals” in 2007, he continued to run cattle and raise alfalfa.  Victor was raised in the First Christian Church at Buffalo and on Easter Sunday 1945, he accepted Jesus as his Lord and Savior and was baptized.  After moving to the farm, he became a member of the Rosston Methodist Church where he was a true and faithful servant.  Throughout the years he consistently served in various church roles. He especially loved sharing Bible stories during the Children’s moment on Sunday mornings.  He truly believed that children were the future of the church.  During Arlene’s illness, Victor’s devotion and love for her was clearly evident. Through his actions, he taught his family how to love unconditionally by always putting her needs before his own. It was during this time that Victor started his card ministry sending over 700 cards per year. The cards always had a personal message from him, decorative stickers and his signature “Remember God loves you and so do I”. His philosophy was “When I am writing in a card, I am focusing on that person and not on myself.”  The last few years, Victor became a member of the Laverne Lions Club and served as reporter writing the weekly article entitled, “The Lions’ Roar”.   He is preceded in death by his “darling wife”, Arlene; his parents, FH “Terby” and Tessie Terbush, Marvin and Pearl Blaine; great grandson: Gavin Shuman; sister: Marie and Pat Melone; in-laws: Arlis and Russ Smith, Peggy Blaine and Al Avery.  Victor is survived by his four children: Janet (David) Cook, Vic (Lynette) Terbush, Nancy Goodner, LuAnn (Frank) Gillispie; ten grandchildren: Doug (Kristin) Cook, Amber Cook, Greg (Stefani) Cook, Valarie (Mike) Wilkerson, Cynthia (Waylon) Glitsch, Victor Leroy Terbush III (Danielle) Terbush, Elizabeth Terbush, Natalie (Jeremy) Bockelman, Jeremy Goodner and Amy Lu (Dandy) Shuman; 17 great grandchildren (and two on the way): Corban, Paige, and Dagan Cook, Sam and Caroline Cook, Kolby Holcombe, Cannon and Carrik Glitsch, Brody, Brock and Paysen Terbush, Haleigh, Hannah, Houston, Holly, and Harrison Victor Bockelman, and Tace Shuman; sister, Bonnie (Gary) Greenwood; brother in law, Cecil Blaine and sister in law, Reeta Avery and precious family members too numerous to list.

To send flowers to the family in memory of Victor Terbush, please visit our flower store.