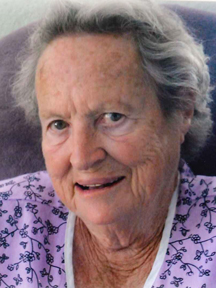 Ula Lea Morgan was born on a farm near Harmon Oklahoma, to Arnold and Emma (Adams) Morgan on February 24, 1936.  She attended school at Arnett Oklahoma. In 1955, she married Henry Clay Patton.  To this union, was four children born, Henry, Billy, Hillard and Marlene Patton and two step-daughters of Darlene, Arlene.  She left Henry in 1980 and later divorced him in 1988, that’s when she moved from Woodward to Buffalo.  While living in Buffalo, Ula worked in the Buffalo Nursing Home caring for the elderly and then later, she took caring for them in their own homes, where she thought she could care for them better and in a place that they knew and loved. She remarried in 1989 to Dean Owens of Buffalo.  Together they traveled not only all over the United States together, but to Canada, Mexico, Korea, and the Bahamas.  They got divorced later but then grew even closer than ever before as they continued to be the closest companions ever. They continued their travels throughout their life together until Dean passed away in February 2016.  Ula cared for him till the very end! Ula loved to fish especially catching crappie, stripers and northern pike.  She also loved the farm life and raising animals.  She loved playing tricks on her brother Jim and niece Colleena particularly.  She also cared for her son’s farm while he was in Korea.  She always said if she knew she could take care of cattle like this, she would have started raising cattle many years ago.  She was always country!!! She is proceeded by Dean Owens; daughter, Ula Marlene in 1962; two sons, Billy Ray in 1972 and Hillard Lee in 1994; three sisters, Hattie Patterson, Ruby Franklin, Jane Counts; six brothers, Duke, Chester, Arnold Jr, Eugene, John and Henry. Ula left her earthly home on March 17, 2018 at Harper County Community Hospital, at the age of 82 years and 24 days.  Ula is survived by son, Henry Patton and wife Mina; grandchildren, Daniel and wife Jennifer, Tamela and husband Chris, Jennifer, Ruth, Shelly, Stormy, Kerrie Dee, Angie, Shannon and Scotty; and 19 Great Grandchildren, 22 Great Great grandchildren, step-daughters, Darlene Burdick and husband Raymond, Arelene Noreuil and husband Ron; brothers, Jim Morgan and wife Pat of Buffalo, and Cork Morgan and wife Dee of Burlingame, Kansas; sister, Dolly Morgan of Scranton Kansas; many nieces and nephews. Ula will be remember by many for her caring of other people and her love for animals.

To send flowers to the family in memory of Ula Patton, please visit our flower store.