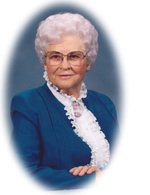 True Lorene Adams, lifetime resident of Harper County, OK, died Friday November 16, 2012, in Buffalo. Funeral services will be held at 2:00 P.M. Friday, November 23, at First Christian Church of Buffalo. Born in the Willard Community, True brightened up the world with her arrival September 25, 1915. On this date, she joined her two brothers and two sisters to make the family complete. She attended Willard School for eight years and then went to live with her grandparents in Ashland, KS to finish her education through high school. After meeting her future husband on a blind date, there was never a thought of another man. She and Wilmer K. Adams were married on Thanksgiving Day, November 28, 1935, and to this union they were blessed with a son James L. Adams and a daughter Marilyn R. (Adams) Carter. Life on the farm northwest of Buffalo went by entirely too fast. True lost her dear husband in February of 1982. She continued living in the country home until she started enjoying town life in her daughter’s home in 2004, much to the delight of her grandchildren. She was a dear, sweet, fun-loving grandmother and card-playing partner. True’s bright smile and kind ways will be sorely missed by her family who loved her so much. She never met a stranger and was just “True” to everyone.

True is now in her heavenly home with her Lord and Savior Jesus Christ, and we joyfully look forward to when once again we will be together.

To send flowers to the family in memory of True Adams, please visit our flower store.