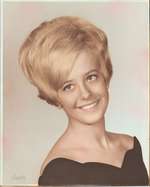 Toni Faye Richards was born in Buffalo Oklahoma to Hal and Blanch (Shaw) Richards  on June 5, 1950.   Toni grew up in Buffalo Oklahoma attending Buffalo Public Schools with her being crowned Miss Buffalo her junior year, graduating from Buffalo High School in 1968. She went on to be crowned Miss Northwe stern at Northwestern Oklahoma State University in 1969. Toni competed in the Miss Oklahoma pageants and the pageant surprised Toni with a birthday party because her birthday was during the pageant competition. Toni ended up as state runner up in the pageant. Toni moved to New York City in 1970 and began working for American Airlines ticket office, New York was not to her liking, so she moved to Oklahoma City for a short time working at the KOMA Radio Station. In 1972 Toni moved to Huntington Beach, California where she began working in Data Technologies. At this time she married Jon Paul Verakis. In 1979, she began working for Celenese, a plastics company. Later, Toni accepted a transfer to San Carlos, California and was married Joe Parlett in 1983, making their home in Danville, California and to this union a son Matthew was born. In 1998 Toni and her son moved to Martinez, California where she worked at Nextel Wireless until 2002 she returned home to Buffalo, and made her home. Toni was employed at AmeriCorps Vista, Editor of the Harper County Journal, K101 OMNI Communications and KWFX – Classic Communications. Toni enjoyed listening to music and traveling and spending time at the beach of California. Toni departed this life on January 31, 2012 in Buffalo, Oklahoma at the age of 61 years after a short battle with cancer. She was preceded in death by her father Hal Richards and Grandmother Faye Shaw. Toni leaves as her survivors her son Matthew Parlett, her mother Blanche Tindell both of Buffalo, Oklahoma, brothers Tad Richards of Claremore, Oklahoma. Kevin Richards of Lake Jackson, Texas, Randy Richards of Fresno, California; Two step sons Brandon Parlett of Buffalo, Oklahoma, and Joe Parlett of Danville, California. other relatives and many friends.

Please click here to view the video tribute
To send flowers to the family in memory of Toni Parlett, please visit our flower store.