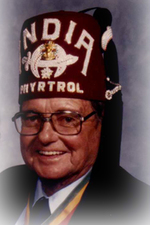 Robert Travis Shahan was born April 10, 1925 in Lindsay, Oklahoma, to Ernest Crawford & Eula (Bennett) Shahan. Travis grew up in Lindsay, Oklahoma where he attended the Lindsay High School, before he was inducted into the United States Army March 29, 1946 station at 253 2 nd Army Air Force Base and was Honorable Discharged from active duty from the Brooke General Hospital in October 10, 1947. Travis & Louise Painter were united in marriage July 3, 1949 at Chickasha, Oklahoma, to this union two children were born Robert C. and Terrilyn. The family moved to Buffalo, Oklahoma in 1965 to make their home Travis was employed with the & Son  Oil Field for 24 ½ years and also worked at the Oklahoma State Highway Dept. Travis Retired in 1980 and enjoyed  camping,  volunteering  at Ft. Supply Lake for 10 years in the summer and spending time with his Grandchildren, and has been  a member of Shriners 50 years.

Travis was preceded in death by his parents and a brother Wayne Shahan; his son Robert Crawford Shahan in 2012.

Robert Travis went to be with the Lord on March 25, 2013. He leaves as his survivors his loving wife Louise of the home; daughter Terrilyn & husband Lonnie Appleton of Buffalo, Oklahoma; sisters Ladell Rayburn and Mary Jane  Shahan 5 grandchildren and 4 Great grandchildren other relatives and many friends.

To send flowers to the family in memory of Robert Shahan, please visit our flower store.