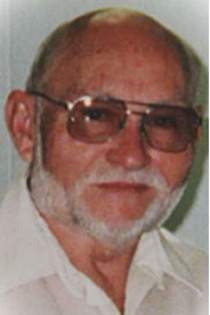 Norval D Schonlau was born to William A and Vivian (Baker) Schonlau on November 19, 1932 on the family farm near Laverne, Oklahoma.  Norval attended grade school and graduated high school in Rosston, Oklahoma, with the class of 1950.  After graduation, Norval served in the US Army as a supply specialist.  Upon completion of his Military duties, Norval returned to the family farm he loved.  While farming, Norval started working in construction and carpentry.  Norval married Mildred Thompson on September 26, 1971, adopting Mildred's daughter Melody on October 11, 1973 and later, son Brett was born.  Norval developed an excellent reputation for building homes and his carpentry work.  After a heart attack in April 1984, Norval made the choice to accept Jesus Christ as his Lord and Savior.  Norval was a member of the Assembly God Church of Buffalo, Oklahoma from that time forward Norval began to mature in his faith by attending Church and Bible Study. Norval served as an usher and faithfully served the task from 1987 until November of 2013.  After the loss of his wife Mildred of 30 years.  Norval turned to his love of carpentry taking on the job of remodeling a home in Buffalo. Norval and Twila Easterwood were married on June 28, 2003, which God blessed joining two families together.  Norval and Twila continued to remodeling the home, making it their home together.  Norval's skill as a carpenter will continue as a testimony for many years.  During these years Norval watched as his two Grandsons Cody and Anthony, grew up, attending ball games and multiple other school and summer activities.  Norval and Twila traveled to California, Florida, The Great Northwest, and Canada. The trip to Canada was with Norval's niece Linda and husband Scott who provided the camper, 4-wheeler, and knew the trails, which inspired many spirited conversations and stories.  Norval enjoyed watching Cody and Anthony grow into young men, getting married, and have families of their own.  Norval often declared that he did not know how to express love, but continually did so.  Norval greatest testimony of faithfulness to the kingdom of God demonstrated the ability to love greatly.  Norval was preceded in death by his parents, William and Vivian Schonlau; infant son Brett Dustin Schonlau on April 25,1974; wife, Mildred Schonlau on April 25, 2001; sister, Yvonne Fleetwood; brothers Charles and Lyle Schonlau. Norval left his earthly home, Wednesday, October 7, 2015, in St. Francis Hospital in Wichita, Kansas.  Norval is survived by his wife; Twila of the home; daughter Melody and husband Richard Bryer of Buffalo, Oklahoma; grandsons, Cody and wife Amanda Bryer of Laverne, Oklahoma and Anthony and wife Krysten Bryer of Seiling, Oklahoma; great grandchildren, Taden, Ann Marie, Cinch, and Parker; brother Lynn and wife Norrisa Schonlau of Thornton, Colorado, nieces, nephews, other family and friends.    Family suggest memorial to the Angel Christmas Tree c/o Oklahoma State Bank, PO Box 70, Buffalo, Oklahoma or Buffalo Museum, Buffalo, Oklahoma.

Please click here to view the video tribute
To send flowers to the family in memory of Norval Schonlau, please visit our flower store.