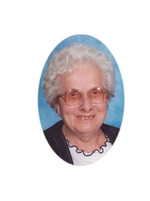 Neoma attended the Union Center School grades 1-8. At the age 13 Neoma accepted Jesus Christ as Lord and Savior and was baptized in a farm pond west of John Crouch’s farm. At the same time, her brother and her dad were baptized. Neoma graduated from the Buffalo High School in 1942. She attended Northwestern State College Alva, Oklahoma and earned her Teaching Certificate. Neoma taught at Paruna School from 1944 -1947 and one year at Doby Springs School. Neoma married Everet Gaddis at her parent’s farm house on November 27, 1946. Pearl Adams made Neoma's Wedding Gown. The new couple moved from the family farm to the Willard Community and made their home. To this union 3 boys were born William Finley "Bill" Samuel Everet "Sam" an infant Paul Dean who was born and died in 1955. In 1959 the family moved to Buffalo, Oklahoma, Everet begain working at the Coop Elevator and became a member of the Buffalo Volunteer Fire Department. Some years later he retired from the Fire Department. In 1963 the family established Gaddis & Sons Dairy Kreen. The fast food restaurant was main great place for families to eat and teenagers to "hangout" in the game room. They started with choice of "Car Hops,” ”Dine Inn,” or “Carry-Out Window” service. Also offered but not listed on the menu was the combination of “Food, Fun, Entertainment and Parent Figures” who were ready to listen with undivided attention and seasoned advice when asked. It was a safe place for young people to get together and hang out. The business saw many changes and many young people grow up in the 21 years the Gaddis Family operated it.

Neoma loved people. She reached out to young mothers through Cradle Roll. She visited and brought child development literature at specific intervals of infant development. Sometimes through multiple siblings in a family, many entire families were blessed. Travelers passing through enjoyed her caring hospitality at the Dairy Kreem. She never met a stranger and made each person feel important and “at home.” She was never critical and never betrayed confidences. She loved trying new recipes and letting people sample the results. Neoma enjoyed crafts, reading, and gardening, spoiling her grandchildren, spending time with her family. She also enjoyed taking home baked treats to people around town. Many received a surprise birthday card or a phone call from Neoma on their birthday. Neoma and Everet sold the restaurant in May 1984 just weeks before Evert passed away. Because she loved greatly, she was greatly loved and respected. Neoma departed this life peacefully back in her room at Grace Living Center Buffalo, at the age 92, on March 17, 2012.

Survivors include her son and wife, Sam and Louise Gaddis, granddaughter, Joy Bethel Gaddis and grandson, Manoah Samuel Gaddis, all from Ardmore, Oklahoma and her sister Ann Adelle Godfrey of Lubbock, Texas, and many nieces, nephews other relatives and friends.

Please click here to view the video tribute
To send flowers to the family in memory of Neoma Gaddis, please visit our flower store.