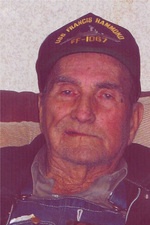 Melvin D. “Joe” Martin of Buffalo, Oklahoma was born on July 22, 1922 in Hulbert, OK to Melvin Luther and Tennie Modine Martin. Joe grew up in the Hulbert area and later in life in the Buffalo area where he met and married the love of his life Betty Jane Denton on September 6, 1975.  Over his lifetime, Joe was an entrepreneur and had many different businesses including several restaurants, gas stations, antique stores, and a car dealership.  He was an animal lover and enjoyed driving around Harper County with his best friends – his dogs Buddy and Yeager by his side.   Joe loved his family and enjoyed spending time with his kids and grandkids and his most beloved role was that of “Papa”. Joe passed away on September 24, 2012 after a short illness at the Grace Living Center, Buffalo, OK at the age of 90 years old. He was preceded in death by his beloved wife, Betty, his parents- Melvin and Tennie Martin, two brothers- Pete Martin and Allen Dow Martin, and three sisters- Trisha Ann Cooper, Mabel Martin, and Beulah Smith, a son-in-law- Mike Farley, and one grandson- Michael Driscoll. He is survived by his daughter Pat Farley and five sons- Melvin Martin and his wife Alice, Jimmy Martin, Bobby Martin and his wife Kathy, Donald Martin and his wife Sherry, and Billy Martin and his wife Mary.  He is also survived by his step-sons Tom Waddle and his wife Debby and Mike Waddle and his wife Tammy.  He is also survived by one brother- Bill Martin and one sister- Betty Joe Madar, twenty-five grandkids and thirty-two great grandkids and numerous nieces, nephews, and friends.

Please click here to view the video tribute
To send flowers to the family in memory of Melvin (Joe) Martin, please visit our flower store.