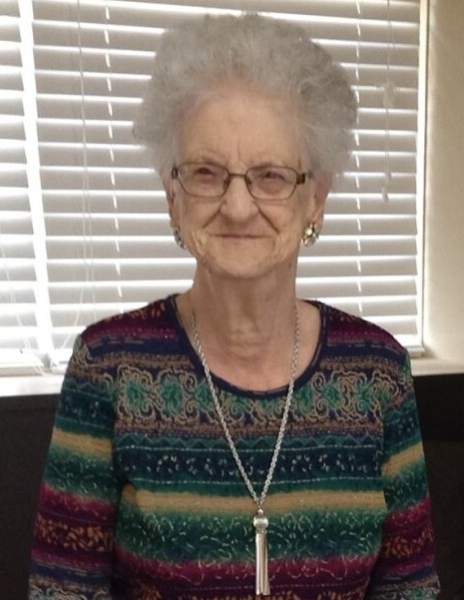 Mary Mae Owens was born to Hattie Mae (Brown) Furgason and John Clarence Furgason near Buffalo, Ok on Feb. 17, 1927.  She was the oldest of 8 children. There were several Marys in her class, so her family and friend called her “Mary Mae” She started working at a clothing store when she was a young teenager. Mary Mae Furgason graduated from Buffalo High School with the class of 1945.  In 1951 she married Dean Owens of Gate, OK. They settled in Knowles, Oklahoma where a daughter Deanna was born, a year later another daughter Marilyn was born.  After several moves the family ended up in Buffalo, Oklahoma. Dean operated the Cities Service gas station for many years while Mary Mae raised the girls.  She eventually started working as a nurses aide at Harper County Community Hospital.  They divorced in 1972.  In 1977 Deanna and Mary Mae moved to Bartlesville, Oklahoma for school.  Marilyn married David Brooks in 1978 and moved to South Carolina.  Eventually Deanna and Mary Mae ended back in Buffalo, Oklahoma for a couple of years before they moving to Garden City, KS.  While there Mary Mae worked in the nursery at the hospital. Mary Mae loved taking care of all of the babies. She retired in 1991 and moved to Laverne, Oklahoma and opened a daycare.  In 1995 she moved to Winfield, Ks with Deanna. Mary Mae did volunteer work at the local hospital.  She so enjoyed helping people. In 2001 Deanna and Mary Mae moved to Lindsay, Oklahoma to be near Marilyn who had become an RN and was not in good health. Mary Mae went to lunch every day at senior center and attended church every Sunday until her hearing got too bad.  In 2017 there was a 90th birthday party for Mary Mae in Buffalo, Oklahoma.  The following year she fell and broke her arm.  She then entered the local nursing home of Lindsay, Oklahoma, because she also suffered from COPD and needed oxygen.  Mary Mae was preceded in death by her parents, two her sisters Virginia Doughery of California, and Hazel Hayes from Laverne, and her daugher Marilyn passed away in 2016. Mary Mae went to be with her Lord and Savior in the nursing home at Lindsay, Oklahoma on June 24, 2020 at the age of 93.  She still was pretty alert until the end and was greatly regarded by the staff. She is survived by a daughter, Deanna of Lindsay, Oklahoma. Three sisters: Georgia Furgason of Buffalo, Oklahoma, Tina McMillian (husband Bill) of St. Charles, MO and Joyce Carnagey (husband Dean) of Laverne, Oklahoma, and two brothers William (Sonny) Furgason (wife Charlotte) of Laverne, Oklahoma and Charles Furgason of Protection, Kansas. One granddaughter Kandi (Brooks) Dodson (husband Russ) and great-granddaughter Kylee Dodson of Marlow and a grandson Justin Brooks of Lindsay.

Mary Mae loved being around people and family.  She never met a stranger. People always liked being around her.  She loved watching hummingbirds and was actually able to go to several hummingbird festivals.  She was almost always in a good mood and had the best smile.   She will be greatly missed.  There will be a family & Friends gathering to share and tell story’s on Friday the 10th from   4PM – 7PM at Wilkinson Funeral Service. Memorial service will be held the next day on Saturday July 11, 2020 at 10:00AM in  the First United Methodist Church in Buffalo, Oklahoma,  later that afternoon the family will place Mary Mae cremains next to her daughter Marilyn in the Knowles cemetery near Knowles, Oklahoma.

To send flowers to the family in memory of Mary Mae Owens, please visit our flower store.