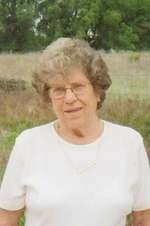 Mary Beth (Irvin) Erwin was born February 5 1933, in rural Mutual, Oklahoma, the daughter of Harry Edward and Alpha Correl (Shockey) Irvin. Mary Beth attended schools at Mutual and Woodward. She began working as a waitress at the Polly Anna and the Erlicks Café, where she met her husband Verlon Erwin. They were united in marriage January 22, 1951 in Clayton, New Mexico. They made their home in the Paruna Community and worked for Ples and Pearl Barnett, then moved to a house on the Patterson’s Farm north of Buffalo. Years later they bought the farm and made their home. As their children Mike, Beth Ann, and Mark were born, they went through the drought of the fifties. Mary Beth loved their farm life, laying her children in a bed of hay on the barn floor while she milked cows, driving the tractor, feeding cattle, and catching the chickens to butcher. Driving the wheat truck at harvest Mary Beth would have her toddlers Mike and Beth in the seat and baby Mark on the floorboard. When the children reached school age, Mary Beth and Verlon drove the Paruna School Buses. Several years later Mary Beth began working at the Buffalo Feedyard as the receptionist/secretary. In 1970 they built a new home on the farm, their current residence. Over the past ten years, Mary Beth and Verlon built a cow herd, she enjoyed the baby calves, many of which she helped Verlon deliver. Mary Beth was a devoted mother and wife. Mary Beth Erwin at the age of 79 died peacefully on Thursday, March 1, 2012 in Buffalo, Oklahoma. Mary Beth is survived by her loving husband Verlon of 61 years, three children son Michael and wife Diana, of Buffalo, Oklahoma, daughter Beth Ann Snell and husband Leon of Buffalo, Oklahoma, son Mark and wife Debra Erwin of Ft. Supply, Oklahoma. Grandchildren Casey Wayne, Rodney and wife Susanne, Amie and husband Jason, Alisha Lynn, Kendy and husband Shane, Lindsay Dawn, Alexia Lee, Shaylee Nicole, Shannon and husband Jeremiah, Tori Nichole, 9 Great-grandchildren, a sister in law Christine Irvin, many other relatives and a host of friends.

To send flowers to the family in memory of Mary Erwin, please visit our flower store.