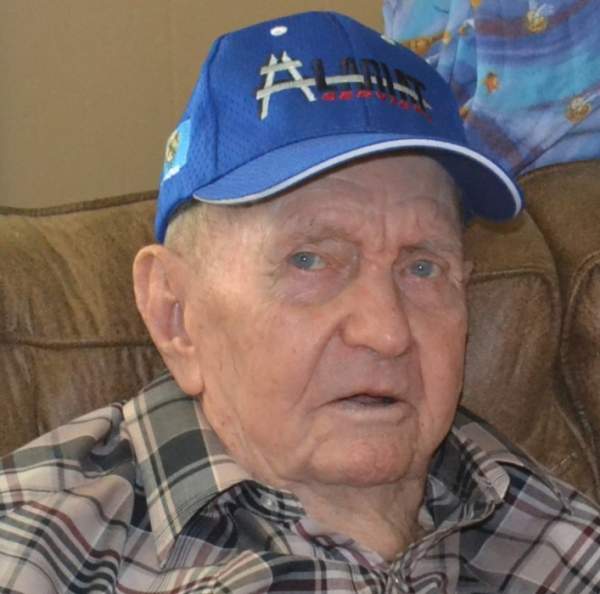 Luther (Luke) Harding Cook was born on the family farm northeast of Rosston, on December 1, 1920, to Adam (Koch) Cook and Gertie Gullett Cook and left this life on August 21, 2017. He was 96 years old. He was the fourth of 5 children and spent his childhood on the family farm until he was drafted into the Armed Forces in October of 1942. Luke, as he was called by family and friends, served in Central Europe, Northern France, Ardennes, Rhineland, during WWII, with the 631st Tank Destroyer Battalion as a sharpshooter and cannoneer.  He was awarded 4 bronze service stars and the Good Conduct Medal. After discharge from the military, in January 1946, Luke returned to the family farm.  On July 3, 1946, Luke married Thelma Demuth in Ashland, Kansas.  To this union, 7 children were born.  Luke worked hard at various jobs to support his growing family, working in construction, working on different farms and ranches, and building fences.  Luke loved the outdoors and the small community life in Harper County.

A memorial service is pending for a later date. In lieu of flowers, the family requests donations be made to the Laverne Ambulance Service or to the Laverne Senior Citizen Center. Under the direction of Wilkinson Funeral Service Buffalo, OK & Ashland, KS. www.wilkinsonfuneralservice.com  to sign or send your condolences to the family.

To send flowers to the family in memory of Luther Cook, please visit our flower store.