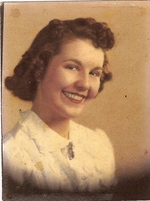 Celebration of the Life of Lorraine Bernice (Davin) Baker

Lorraine was born on February 22, 1923 in Price Utah to Fred and Rachel Davin who had immigrated to the United States from France. She had two older brothers Fred and Martin, who doted on their beautiful little sister. Her father managed a hotel in Price until Lorraine was a junior in High School and the family moved to Bakersfield, California, where her father bought farm land and grew cotton, grapes and alfalfa. Even though Lorraine could understand French, she spoke almost exclusively in English as it was the wish of her parents and her generation to be considered Americans and not immigrants. Lorraine graduated from Bakersfield High School and worked at the high school office, and the general store and then at the Stockton California Army Air Corps Base where, on a blind date she met her future husband, Army Air Corps Lt. Al Baker, of Buffalo, Oklahoma. They were married three months later on August 30, 1943. Their marriage lasted almost 60 years until Jesus called Al home on August 2, 2002. Their first child, Cherie, was born December 30, 1944, at an Army Hospital in Modesto, California, while Al was stationed in Roswell, New Mexico. Lorraine’s Mother stayed with her and Cherie until they were able to join Al in New Mexico. After the war was over, Al Lorraine and Cherie moved to Buffalo, Oklahoma where Al would help his father run the Baker Equipment Company. Their second child, Teresa, was born in Woodward on May 14, 1949. In 1954 the family moved to Stillwater, Oklahoma so Al could complete his business degree. Their third child, Doug was born in Stillwater May 3, 1955, Lorraine was active with her children’s lives and helping them with Girl Scouts, Cub Scouts, cheerleading, baseball, piano, newspaper routes and getting homework done on time. A little known fact about Lorraine is that she could beat almost anyone at checkers. When Lorraine was 48 years old she started working as a nurse’s aide in nursing homes, first in Guymon, then in Oklahoma City, Beaver, and Buffalo.  She worked almost 25 years until she was 72 years old and slipped on ice on her way to work and broke her leg. Lorraine made many friends at this job she loved.  In recent years Lorraine enjoyed sharing Jesus with people until she moved to heaven on Monday October 8, 2012. Lorraine is survived by her three children Cherie Madzey, Teresa Litz and Doug Baker; four grandchildren: Lance Madzey, Rachel Jones, Ryan Litz and wife Carmel, Shannon Cotter and husband Brandon; and ten great grandchildren Cassidy, Logan, Griffin and Camrey Litz; Preston, Avery, Colson and Jenson Cotter (who is expected to arrive in two weeks) and Lloyd and Devin Jones. Lorraine’s family remembers her as a devoted wife, mother, grandmother, great grandmother, friend and neighbor. She was always supportive and helpful even in the smallest of things that continue to make a difference in our lives. She has been an example of unconditional love to those who knew her. Her kindness was based on her faith in our Lord and Savior Jesus Christ. Lorraine’s family is thankful for your prayers for her and for their family and for your being here with them.  One thing that we are so thankful for is Salvation in Jesus saving our Mother from her sins with His Blood on the Cross and God raising Him from the dead.  By this we know we will be reunited with her in Heaven and be with Jesus Christ forever. Amen. It is so important for us as children to know that our parents are saved and for us as parents to know that our children are saved; because this life is temporary and the next life is eternal.

Graveside service was held, Wednesday October 10, 2012 at 1:00 PM in the High Point Cemetery, Buffalo, Ok with Pastor Bill Tindell officiating.  Grandson Ryan Litz and his family sang Amazing Grace.  The service was under the direction of Wilkinson Funeral Service, Buffalo, Ok.  Condolences can be made to the family at www.wilkinsonfuneralservice.com .

To send flowers to the family in memory of Lorraine Baker, please visit our flower store.