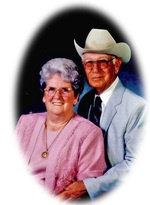 Lola Maurene (McNaughton) Zollinger was born January 10, 1927 near Ashland, Kansas.  Lola was the daughter of Roy Laurence and Sally Ola (Durham) McNaughton. The family moved to the Willard Community in 1932.  Lola liked to make a joke that she lived on the same corner nearly all her life and lived in the same house from the age of 4 until moving to Buffalo in 1993.  Lola attended the Prospect Valley Grade School where she graduated from the 8 th grade.  Lola attended grades 9 thru 12 in Buffalo, Oklahoma which was a big change from attending a one room county school, where she later graduated with the Class of 1944. In 1945 Lola worked at McIntyre Drug Store were she met John Zollinger, after he  returned from World War II, John and Lola were married on April 29, 1946 at Ashland, Kansas.  They lived 4 miles west of Buffalo working for Merle Cosby until 1948, when they moved to the Girard Community. After moving back to the family farm two sons were born, Johnnie and Terry. Lola working at the Harper County Community Hospital for 32 years and for 27 of those years she was the Certified Dietary Manager.  She enjoyed visiting with the patients about their eating habits and special diets.  Lola enjoyed her job at the hospital very much and was very proud that she drove 21 miles one way from the country without a single accident and only missed a few days of work mostly due to bad weather. “Grandma” Lola’s door was always open for her 7 grandchildren and their friends, with plenty of cookies, cinnamon rolls, and other goodies that only grandmothers could make. Lola was always a very kind and positive person with a big smile and seeing the best side of everything and everyone.  She was the Ultimate farm wife, mom & Grandma, with words of encouragement, support and love for all around her. Lola was a member of the Assembly of God Church and Home Demonstration Liberty Club. Lola moved to her heavenly home at the Grace Living Center in Buffalo, Oklahoma at the age of 85 years, 10 months, 16 days, after a strong and courageous battle with Parkinson. Lola was preceded in death by loving husband John, her parents, brothers Leon, Warren and an infant brother Jessie. Lola is survived by her children Johnnie and wife Dana Zollinger, of Buffalo, Oklahoma, Terry and Alice Zollinger of Buffalo, Oklahoma.  One brother Marvin and Maxine McNaughton of Enid, Oklahoma, One sister, Lois Torrance of Buffalo, Oklahoma, One Sister-in-law Lela McNaughton of Buffalo, Oklahoma, 7 Grandchildren, and 12 Great Grandchildren, many nieces and nephews, other relatives, and many friends.

To send flowers to the family in memory of Lola Zollinger, please visit our flower store.