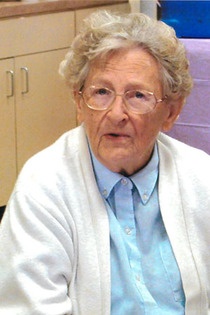 Leona Margaret Kraus was born on November 23, 1922 ten miles northeast of Buffalo, Oklahoma in the Paruna Community to Soloman L. and Hattie (Krenz) Kraus.  Leona had one brother Kenneth Kraus.  Leona attended the Independence Country School through the 8 th grade.  Leona married James B Logan on May 31, 1941 in Ashland, Kansas, and to this union two children were born Margaret Ann and James David (JD).  Leona and Jim made their first home in the Gyp Valley Community.  In the fall of 1942 Leona and Jim moved to the Grandview Community, later returning to the Gyp Valley Community in the fall of 1945.  Jim suffered a heart attack and passed away while fixing fence on March 11, 1954.  Leona moved to Buffalo and met Orvin G. Camp, they were married on July 16, 1957, and to this union Rebecca was born.  Orvin passed away on February 3, 1977.  Leona worked as a waitress at the Nifty Nine Café and Chuck Wagon Café.  For over 23 years Leona worked at Harper’s Café in Buffalo, Oklahoma.  Leona moved to Ashland in August 1991. Leona enjoyed quilting, crocheting, working crossword puzzles, and putting together jigsaw puzzles.  Leona favorite pastime was having her family around especially her grandchildren and great grandchildren. Leona would spend hours sitting on her porch swing watching the kids play at the grade school. Another favorite activity was the family Halloween gathering and all the little spooks.  Leona was preceded in death by her parents; Soloman and Hattie, husbands; Jim and Orvin, brother; Kenneth, daughter; Margaret Watts.  Leona left her earthly home on November 9, 2015 at the Ashland Long Term Care Center at the age of 92 years, 11 months, 17 days.  Leona is survived by son; JD, daughter; Becky, six grandchildren, nineteen great-grandchildren, and six great-great-grandchildren, nieces, nephews, family, and friends.  In lieu of flowers family suggest memorial to WEPAC, PO Box 949, Ashland, KS and Hospice of the Prairie, PO Box 1298, Dodge City, KS  67801.

To send flowers to the family in memory of Leona Camp, please visit our flower store.