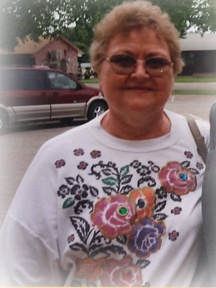 Lela Alice Berends Harrington was born February 12, 1936, to Ephraim Joakim Berends and Leona Despain Berends, in Beaver County, Oklahoma, and graduated from this life to her heavenly home on August 21, 2019, in Buffalo, Oklahoma. Lela graduated from Englewood High School, Englewood, Kansas, in 1953 as valedictorian of her class.  She went to a business school in Wichita, Kansas, for a six-month course.  She worked for a year at Dodge City, Kansas, in the co-op office.  She also did babysitting for the Charlie Theis family.  Lela married Ray Harrington on June 1, 1957 and moved with her husband to a ranch Northwest of Englewood, Kansas.  Cathy Diane was born June 12, 1959.  Lela said she never had to wonder where Cathy was because she could always hear her singing.  Her heart was broken when Bruce Kent was born September 6, 1961, with Spina Bifida and Hydrocephalus.  Bruce lived only fifteen months.  Carla Jolene was born August 14, 1964, in Ashland, Kansas, on her Uncle Clarence’s fifty-second birthday.  When it came time for Cathy to start school, the family moved South of Ashland by the airport so she would not have to ride a bus from Englewood every day.  They later moved into town and Lela ran a café named the Sun and Sod Café. Her specialty was homemade pies.  She also worked in Buffalo, Oklahoma, at various restaurants.        Neva Alice was born August 29, 1967, in Ashland, Kansas.  Sometime later they moved to the Dunn Ranch South of Ashland.  One year while they were living there, a big snow came and they were snowed in for a week.  Their next move was to a ranch North of Woodward, Oklahoma.  Lela worked for a while for Trego Western Wear in Woodward.  She started by sewing leather coats and later did just about everything, including inspecting, shipping and packing.  She moved to Buffalo, Oklahoma, in November of 1974.  After her divorce in February 1975, Lela was asked to run for County Clerk of Harper County.  She ran, won the election, and held the job for twenty years. Her hobbies include cooking, being very good at feeding family or at large gatherings, spoiling grandkids with her specialty, snickerdoodles, cinnamon rolls and bierox.  The list goes on and on.  She also enjoyed sewing.  She provided clothing for her daughters for many years.  She took great pride in her beautiful flowers and rock garden, spending many hours planting and pruning.  She had many rose bushes, lilac bushes and a honeysuckle bush.  But don’t forget her hen and chicks.

To send flowers to the family in memory of Lela Harrington, please visit our flower store.