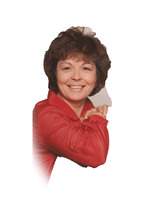 Sue Appleton left this earth to be with her Lord and Savior on February 3, 2011 in Oklahoma City, Oklahoma after a short illness with her family by her side. Sue was born Lela Sue Bell to Gene and Wanda (Farrell) Bell on May 5, 1950 in Woodward, Oklahoma.  She was born on her father’s birthday. Sue attended May Grade School in May, Oklahoma, then Gage, Oklahoma for grades 7 and 8, and grades 9 through 12 in Buffalo, Oklahoma. She graduated from Buffalo High School in 1968. Sue married Ernie Dupy of Waynoka, Oklahoma in 1968, and to this marriage was born 3 children:  Rebecca Renae, Rachael Tanette, and Matthew Shane.  After the marriage ended in divorce, Sue moved back to Buffalo where she married Delbert Appleton in 1976 and he then adopted her children.  After the children were grown and had their own lives, Delbert and Sue moved to Enid, then Granite where their 30 year marriage ended in divorce. After a short time in Piedmont, she moved to Gage, Oklahoma in 2010.  In early November 2010 she and her new love, Mike Pasquarosa bought a new home in Gage.  They planned to live a wonderful and fulfilled life there near her mother Wanda Bell, sister Nancy Morley and niece Starla Clark. She worked at the Gage Public Library and loved her books. While in Granite Sue attended the Methodist church and became the secretary.  She was dedicated to this position and took her job very seriously.  She loved to sing and sang in the church choir.  She loved singing so much that she recorded a song for her mother.  Sue raised her children in the church and taught them the Christian values that she herself had when she found God.  Sue enjoyed decorating her home and doing crafts with her grandchildren.  They remember doing paper mache with her and the fun messes they made. They called her the best Gramma in the world.  She also enjoyed reading, crocheting, knitting, and working in the yard and flower beds. She was preceded in death by her father and a nephew. She is survived by her children, Rebecca Milligan of Yukon, Rachael and Wesley Howell of Granite, Matt Appleton of Piedmont, her mother, Wanda Bell of Gage, a sister Nancy and Richard Morley of Gage, 2 brothers, Marvin and Jane Bell of Sylvester, Georgia, Geordie and Karen Bell of Sapulpa, her grandchildren Kinzi Leonard, Kadi Leonard, Kaci Milligan, Jessica Kono, Lexi Tiner, Brittany Howell, Bryce Howell, Logan Appleton, Lauren Appleton and all her many family members and friends.

To send flowers to the family in memory of Lela Appleton, please visit our flower store.