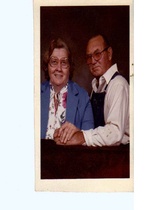 Laurene Dean (Barnett) Carpenter was born April 9, 1930 on the family farm near the Kibby community, south of Buffalo, Oklahoma, to James and Bertha Barnett. Laurene attended the Selman Schools. On October 21, 1948 Laurene and Lewis Carpenter were united in marriage at Perryton, Texas; and to this union 3 children were born a son Lewis, two daughters Connie and Linda. The family lived in the Selman Community for a time then they moved to Woodward Oklahoma and made their home until 1968 when the family moved to Buffalo, Oklahoma. Laurene was a home maker and enjoyed sewing, quilting, and work with crafts along with working in her garden. Laurene attended the United Methodist Church, of Buffalo, Oklahoma.  Laurene went to be with the Lord on Monday, March 4, 2013 at her home.  Laurene was preceded in death by her parents and husband Lewis October 31, 1996 and her sister Corene Huckaby March 4, 2004. Laurene leaves as her survivors her son Lewis & Brenda Carpenter of Buffalo, Oklahoma, two daughters Connie Hagen of Alva, Oklahoma, Linda & Larry Glennie of Woodward, Oklahoma, a sister Wanda Mounce of Dansville, Arkansas; Four Grandchildren, Rodney Dean Glennie and wife Cristy of Alva, Oklahoma, Curtis Glennie of Woodward, Chalon Carpenter Collier and husband Brian of Buffalo, Oklahoma, Gloria Skye Carpenter, of Waynoka, Oklahoma and 9 Great Grandchildren, and 4 Great-Great Grandchildren.

To send flowers to the family in memory of Laurene Carpenter, please visit our flower store.