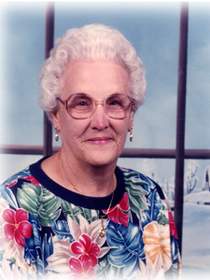 Iva June (Underwood) Lemons, was born on May 27, 1918 at Kiefer, Oklahoma to Jake and Iva Clementine Underwood, she was better known to family and friends as “June”.  She attended the Kiefer School through the 8 th or 9 th grade. June and Hurley Lemons were united in marriage January 6 1941 at Kiefer, Oklahoma and to this union two sons were born Delbert & Jerry Lemons. June made her home in Buffalo around 1980 to be closer to her sons.  June enjoyed crocheting, going to church Assembly of God Sunday and Wednesday night and best of all sitting outside with neighbors, friends, nieces, and nephews that came by to visit.  She was preceded in death by her parents, husband Hurley,  August 1, 1972; son Jerry Lemons, June 26, 2005; brother Carl Underwood; and three sisters Ruby, Juanita, and Dorothy May; Grand Daughter Tammie Walker; and Great Granddaughter Bailey Walker. June left her earthly home January 19, 2016, at the Grace Living Center, Buffalo, Oklahoma, at the age of 97 years, 7 months, and 23 days.  June leaves as her survivors a son Delbert Lemons of Buffalo, Oklahoma; 5 grandchildren; 6 Great Grandchildren; 4 Great-Great Grandchildren; other relatives, nieces, nephews and many friends.

To send flowers to the family in memory of June Lemons, please visit our flower store.