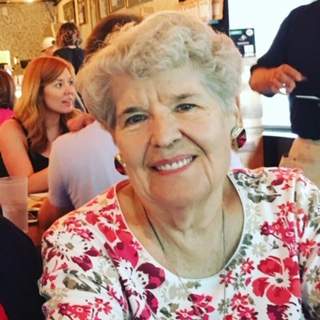 Joyce was born April 4, 1939 to Floyd and Corinne Tilford in Tucson, Arizona.  The family moved to Moscow, Kansas in January of 1949.  Joyce spent the rest of her childhood years growing up on the farm.  She helped with farm chores and helped her parents with her younger siblings.   Joyce excelled in school and graduated as Valedictorian from Moscow High School in 1957.  After high school, Joyce moved to Hugoton, Kansas and went to work at Ideal Grocery Store.  It was there she met the love of her life, Bob Brooks, and they were united in marriage in 1959. Bob and Joyce had five children, Sherry, Jerry, Larry, Mary Jane, and Terry.   Joyce was a homemaker and stay at home mother to her children.  As the children grew older and were in school, Joyce went to work at 1st National Bank in Hooker in the Bookkeeping Department.  She later moved to Woodward, Oklahoma to be closer to her children and grandchildren. There she worked at Stock Exchange bank until her retirement.  Joyce was highly active in the Senior Citizen’s Center in Woodward, and there she enjoyed ceramics, playing card games and participating in the choir.  In 2005, Joyce moved to Buffalo, Oklahoma next door to her daughter Mary Jane.  She enjoyed being close to her grandkids and going to their activities.   Faith was an important part of her life and she raised all five of her children to know and love Jesus Christ. She enjoyed gospel and Christian music as well as attending church on Sundays. She was preceded in death by her parents Floyd and Corinne Tilford, one brother Duane Tilford, husband Bob Brooks and daughter Sherry Crall.   Joyce Elaine Brooks went home to be with her Lord and Savior Jesus Christ on July 2, 2020 at the age of 81 years at Western Skilled Nursing Center in Buffalo, Oklahoma.  Joyce is survived by her children; Jerry and wife Ladonna of Mulhall, Oklahoma, Larry and wife Tonya of Woodward, Oklahoma, Mary Jane & husband Mac of Buffalo, Oklahoma, Terry and wife Sonya of Buffalo, Oklahoma; son-in law Les Crall of Weatherford, Oklahoma; sister, JoAnn Rateledge, Moscow, Kansas, brother Arthur Tilford, Liberal, Kansas, sister Marilyn Sessions, Aurora, Colorado, sister Wanda Tilford, North Newton, Kansas, sister Marian Tilford, Manhattan, Kansas, brother Kenneth Tilford, Edwardsville, Kansas.  She was also a proud grandmother to 12 grandchildren and 6 great grandchildren, Other relatives’ nieces, nephews, and great friends.  Joyce will be missed at the card game table and playing games with her family.

To send flowers to the family in memory of Joyce Brooks, please visit our flower store.