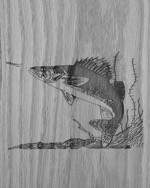 Joe and Mary moved to Fort Supply, Oklahoma in 1991 where they operated the convenient store, The McDowell Short Stop where Joe made knives. Joe loved the outdoors, he enjoyed taking several fishing trips, with his family and grandkids.

Joe was preceded in death by her parents Charles and Dora McDowell, 2 brothers, and 1 sister.

Joe passed away at the Harper County Community Hospital on December 18, 2010, at the age of 74. Joe will be greatly missed by family and friends.

Please click here to view the video tribute
To send flowers to the family in memory of Joe McDowell Sr., please visit our flower store.