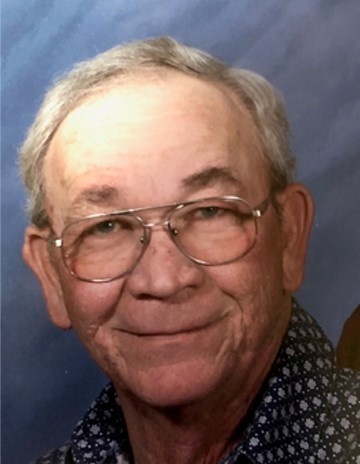 James “Jim” Kent Wyatt (Papa Jim) was born December 13, 1941 to James Kermit and Virginia Margaret Cook Wyatt at the Ashland hospital in Ashland, Kansas. Jim was blessed with four sisters: Margaret “Peggy”, Virginia, Sharon, and Debra.  Jim attended Ashland schools, graduating from Ashland High School in 1960.  Jim worked on the AT&SF railroad in Wichita as a railroad construction worker.  Jim returned to southwest Kansas and worked as a mechanic for the Chevy garage in Meade.  In 19633, Jim joined the United States Navy as a Construction Mechanic (CM) in the Seabee construction forces.  His career in the military was cut short due to the loss of his sister, Peggy, and returned home to help his mom and sisters. Jim was honorably discharged in 1965.  Upon returning home, Jim joined in marriage with Betty Ann Gibson in 1966 and resided in Ashland, later divorcing in 1979.  During this time, Jim worked as a cattle buyer and raised horses.  In 1980, Jim married Joyce Louise Musgrove in Ashland, and they made their home near Sitka Kansas.  Joyce had three children, Felix, Jason, and Jolie, who he adopted.  Jim enjoyed his professions which included owning and operating a gravel hauling business, clerking livestock sales and various auctions in surrounding communities, working as a dispatcher at the Clark County sheriff’s office, hauling propane for Waits, Inc. but most of all he enjoyed his role, of many years, as the mail carrier for the rural citizens of Ashland. Jim had a life-long love of raising and racing quarter horses. He enjoyed playing golf, fishing, motorcycle riding, swapping stories with friends, and spending time with family.  In later years, Jim loved bragging about his grandchildren and great-grandchildren, spending time with them, teaching them about horses, and taking drives in the country.  Jim also enjoyed attending church services at the First Christian Church until his health would not allow him to do so. Jim was preceded in death by his parents and a sister Peggy. Jim went to be with his Lord and Savior on February 25, 2020, at the age of 78, at the Meade District Hospital, Meade Kansas.  Jim is survived by his children: Felix and wife Jacqueline of Winchester, CA, Jason and wife Franie of St. John and Jolie and husband Scott of Meade.  Three sisters: Virginia (Virgie) and husband Von of Ashland, Sharon and husband Steve of Fredonia, and Debbie and husband Ben of Ashland.  His Grandchildren: Haley Jaglowski and husband Ty of Murrieta, CA, Chelsey LeClear of Balko, OK, Christine LeClear of Stillwater, OK, Holden Girard of Manhattan, KS and Stone Wyatt of Winchester, CA.  His Great Granddaughters:  Rylee and Addison Jaglowski of Murrieta, CA. and many nieces, nephews and a host of friends. Military Graveside rite by the Ashland VFW and the SHOW team of Ashland High School.

To send flowers to the family in memory of Jim Wyatt, please visit our flower store.