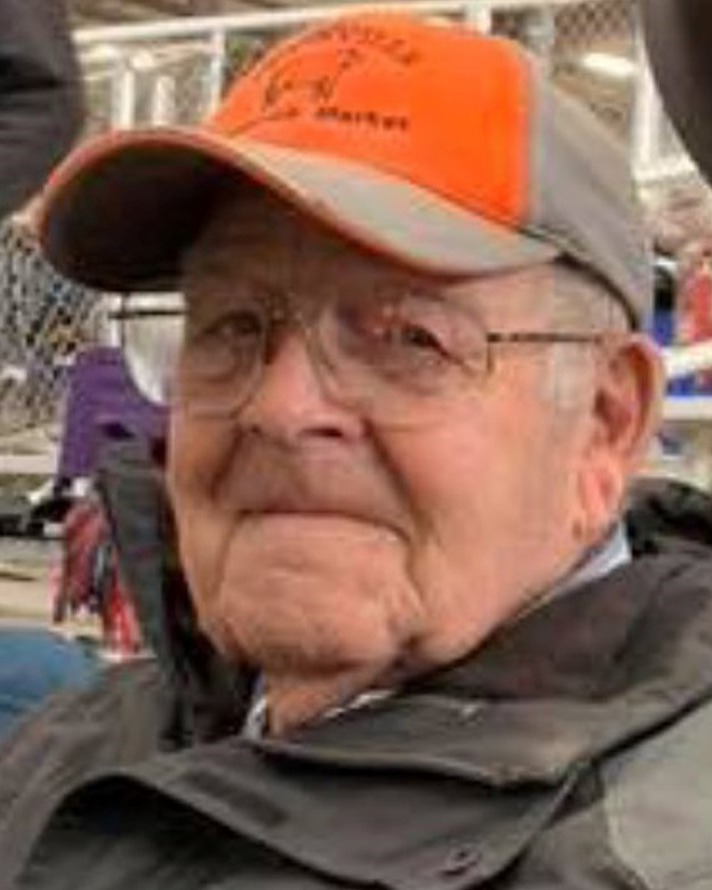 After a short illness Jim passed away November 18, 2022. Born in Attica, Kansas, December 17, 1927, to the late James Clyde Arnold, Sr., and Elizabeth Irene Polsley. He married Vesta Velda Goodrich August 25, 1946. Wearing Levi jeans, a pearl snap shirt, his boots, and the traditional toothpick hanging from his mouth he said, “I do.”

As a youngster Jim earned money by putting meringue on chosen pies at his parent's bakery for ten cents a day.  Money in hand and with his prize pig for trade, he headed off to purchase his very first horse.  Believe or not an Arabian stallion!

As a teen he worked for Harry Shepler, owner of Shelpers Western Wear training horses. No longer interested in meringue or training horses for someone else, the Wichita Stock Yards seem rather appealing.

He made himself visible with annoying appearances on a regular basis, until he was hired by Young and Cooper Cattle Company of Wichita. This began a long and respected career being a ranch hand and foreman.   His first ranching job was in Dillon, Montana, at the infamous Matador ranch, owned by the Koch Brothers.   He convinced Les Cooper in 1956 to have him come to Ashland to take care of wheat pasture cattle and later leased the Ravenscraft ranch.  Vesta and the three kids joined Jim there.  Jim loved his horses, raising colts from his mares and studs, buying, trading, and selling them. His policy was to take a bad one and make him a good one or take a good one and make him great.  Many of the horses he raised or owned went on to win numerous titles and make money for their owners.

While his kids were growing up they always had horses to ride and thousands of acres to ride them in.  He always had a band of kids from town ready to help.  Anyone who showed an interest in riding or roping was welcome to come to the ranch, receiving life lessons.  He taught his kids to break colts to lead as yearlings and break them to ride as two-year-old’s.  Shetlands were among the victims.  Several of this crew came to be lifelong friends of his and his family. They had some wild and fun times together.  He always considered Ashland home.

Fifteen years and two girls later they left Ashland and moved to the sand hills of western Kansas.   Jim and Vesta topped the Kendall hill by the cemetery for the very first time, Vesta looked at Jim and said, "Don't you dare bury me here!"   Bowling became a big part of their lives during this time.   Like everything else he did, if he was going to do it, he was going to try to be good at it.   Never having bowled in his life within a few short years he and Vesta were bowling as a solid doubles team. Upon qualifying for the Miller Highlife doubles championships in Reno, Nevada they placed 13th among teams from across the US.  Dad was interviewed by the Wide World of Sports all the while holding a chew in his lip.

While in Kendall, Jim would go to Jennings Arena where he would team rope. He also helped all the kids and young adults that had anything to do with rodeo creating more lifelong friends. While there, he partnered with Tony Beatty and together they built one of the best cowherds in the country. He did it all on horseback, absolutely no 4 wheelers were allowed. He was almost as proud of those cows as he was his horses.

Jim and Vesta retired traveling the country enjoying its beauty.  Vesta retired while on this adventure, but Jim just kept on working.  He was Jack of all trades at any campground.  Making friends along the way every single day.

Jim and Vesta settling in Hutchinson continuing their lifelong dream of breeding the best ranch and rodeo horses.  Upon Vesta's passing, Jim found a new companion, a Dunn studhorse named Hunky.  After a short stay in Missouri, he once again returned to Ashland.

One little story about Jim's sense of justice.  An elderly scamp from town asked if he could go fishing on the ranch.  Jim said that would be fine any time.  He could go fishing anytime but there were three rules: no campfires, no trotlines, and no jug fishing.

Well, all was fine for awhile.  Then one day we pulled up on a high ridge overlooking one of the ponds. Guess who was there?  Mr. Scamp in his little row boat, checking the half dozen glass jugs he had set in the pond.  Jim sat there a minute, grumbled something, and got his coyote rifle out of its rack.  Sticking the gun out of his window he proceeded to blow up each jug, one by one.  You never saw anyone paddle so fast.  As far as anyone knows he never said a word to the scamp.  He did continue to fish on the ranch, but there were never any more jugs.

Jim moved back to Ashland a few years ago.  He was welcomed back with open arms.  He was never allowed to pay for a cup of coffee or any food at the local convenience store where they spoiled him rotten.  When he pulled up, someone was always there to open the door or help him.  He was a member of “The House of Knowledge" who met daily at three o'clock to solve all the world's problems.  When asked what he had been up to he would often reply, “Spreading hate and discontent".  If for some reason he did not make it to coffee someone would call to make sure he was OK.

He enjoyed fishing with friends, kids, and grandkids.  To Jim it was more about the visiting than catching the fish.  He did like it better if they were biting.  He also liked just going back up to the ranch to look at the country.

Jim enjoyed going to the Degnan arena and watching the kid’s practice.  He was ready with a smile, a laugh and lots of encouragement.  He frequented the rodeo play nights at Buffalo OK. Where ever he set up his chair there would be a circle of kids around him.  Kids were drawn to him like bees to honey.  When one of them won an event they would bring their prize or check for Grandpa Jim to see. When he was in the hospital for the last time someone wrote on his hospital information board after his name AKA THE LEGEND.  He was pleasant in all weathers. He never shirked a task.

A six-year-old girl once asked Jim how old he was.  When he told her she asked, "Well has it been a good life?"  He chuckled and said, "Good enough for me!

Jim is survived by his five children

Proceding him in death are his wife Vesta, and

Jim will be missed by family and a host of friends.

Family suggest in lieu of flowers, memorials to be made to the Harper County Round Up Club PO Box 177 Buffalo, OK. 73834

To send flowers to the family in memory of James Arnold, please visit our flower store.