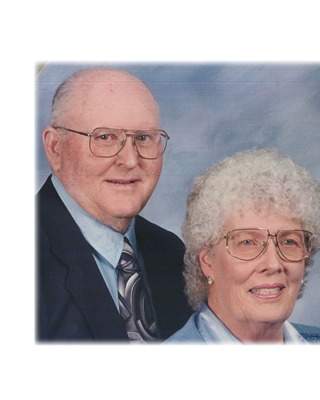 Warren Keith Harrington was born February 14, 1930, in Ashland, Kansas, to Newell and Alice Harrington. Warren, better known to family and friends as “Jab,” grew up in the Englewood and Ashland area, where he graduated with the class of 1948. Jab attended college before enlisting in the United States Navy. He served in the Navy from 1950 through 1954. Jab and Ellen Allison were afterward united in marriage, and they had two sons, Bob and Gordon. The family made their home in the Englewood/Ashland area all of their lives, farming and raising cattle. Jab and Ellen both retired and enjoyed bus tours throughout the United States. They loved spending time with their children, grandchildren, great-grandchildren, relatives, and many friends. Jab was known for his outgoing, ornery personality. He loved fishing and drinking coffee with family and friends.

Jab went to his heavenly home on August 24, 2022, in the Ashland Health Center with family and caregivers at his bedside.

The Harrington Family would love to invite you to a gathering at the Ashland Senior Center on Monday, August 29, 2022, from 9:00 am to 11:00 am (800 Main Street in Ashland, KS) to share memories about Jab with his family and friends.

Following this gathering, friends and family are invited to join a celebration of Jab's life at 1:00 pm the Highland Cemetery at County Road 21 in Ashland, KS.

To send flowers to the family in memory of "Jab" Warren Harrington, please visit our flower store.