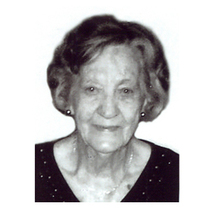 Inez Abercrombie was born November 7, 1917 to John and Louie Abercrombie on the family farm near Kibby, Oklahoma.  Inez moved with her family to Buffalo when she was three years old.  Inez attended school in Buffalo and graduated in 1935.  After high school she attended Hills Business College in Oklahoma City.  She returned to Buffalo where she worked for the County Agent.  She later went to work for the Deputy Court Clerk.  Inez married Glen W Crouch on December 24, 1937.  They made their home in Buffalo living in a little house that belonged to Glen's parents.  After one year in Buffalo Inez and Glen moved to the Kibby community.  Inez continued to work as the Deputy Court Clerk until shortly before her first child, Galen was born on February 11, 1939.  Inez continued to work part time for three lawyers in Buffalo.  First daughter Glenda was born December 26, 1940.  In the spring of 1941 Glen, Inez and family moved to Mississippi to a ranch South of Jackson.  Galen was two years old and Glenda was three months old.  They then moved to Laverne, Oklahoma in August 1943, two weeks later Sherry was born on August 22, 1943.  Then Joyce was born on February 9, 1950 and two years later George was born February 13, 1952.  Glen, Inez and their five children moved to Picayune, Mississippi in November 1955, Glen managed a ranch.   In April 1956 they moved to San Luis, Colorado where Glen managed a large ranch for seven years.  The ranch sold and Glen and the family moved to Oakley, Kansas to manage a ranch for approximately two year, then return to Laverne for a short time.  In 1960 they moved to Ellisville, Mississippi where Glen managed a large ranch.  In 1968 the family return to Buffalo to take care of Grandmother Amy Crouch and run the family ranch.  Inez was baptized in the Baptist Church when she was 12 years old. Inez later joined the First Christian Church of Buffalo.  Inez was an exceptional gardener and canned lots of produce.  She enjoyed collecting antiques and quilting.  When in Colorado she served as President of the Costilla County Red Cross Chapter, where she received recognition from the Red Cross for the most money raised. She was also President of the Home Demonstration Club in Costilla County.  In Buffalo she served as President of ALYI (As you Like It) Club.  Inez lived at her home in Buffalo, Oklahoma until May 2015, when she was moved to Grace Living Center in Buffalo, Oklahoma.  Inez was proceeded by her parents, John and Louie; brother, Taylor; her loving husband, Glen; sons, Galen and George; and daughter, Sherry. Inez went to be with her Lord and Savior on January 18, 2016 after a short battle with pneumonia at the Harper County Community Hospital.  Inez leaves as her survivors daughter's, Glenda and husband Robert Ramsey of Bartlett, Nebraska, and Joyce and husband Glenn Dean Lake of Buffalo, Oklahoma; grandchildren, Alan and wife Andrea of Bartlett, Nebraska, Jon and wife Melissa Ramsey of Davis, California, David and wife Lorie Ramsey of Mason, Ohio, Jerry and wife Maryline Smith of Frisco, Texas, Joe and wife Christine Lake of Edmond, Oklahoma, Phillip and wife Gail Crouch of Tulsa, Oklahoma, Jennifer and husband Ken Widman of Overland Park, Kansas; step granddaughter, Darci Immell of Buffalo, Oklahoma; great grandchildren, Cody Ramsey, Morgan Ramsey, Nathan Ramsey, Noah Ramsey, Brodi Smith, Kenna Lake, Kira Lake, Keely Lake, Avery Crouch, Liam Crouch, Amelia Crouch, Jake Widman, Carter Widman; step great granddaughter, Alex Letherman; as well as numerous other relatives and many friends.

To send flowers to the family in memory of Inez Crouch, please visit our flower store.