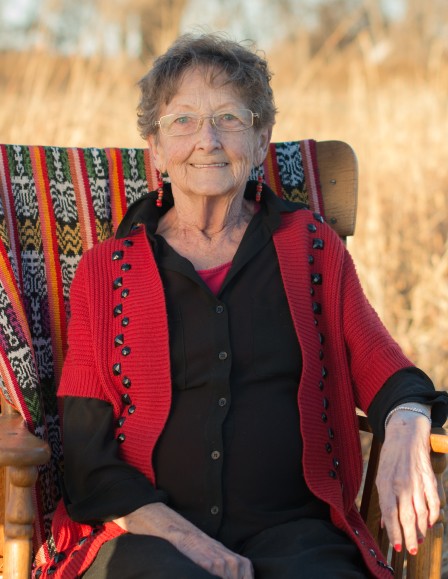 Ila Marie (Redwine) Bentley was born on December 21, 1937 in her parents’ home near the Paruna Community, northeast of Buffalo, Oklahoma.

She attended first grade at Paruna Grade School and then moved to Buffalo, Oklahoma with her family, to complete her grade and high school years. After Ila graduated from Buffalo High School, she moved to Oklahoma City, where she attend Beauty College. Ila obtained a degree as a manicurist. While Ila was attending Beauty College her parents moved to Vici, Oklahoma, where she later joined them. In Vici she met the love of her life, Willis Bentley, and on July 5th 1957 they were joined in marriage. Willis began working for Amerada, a Seismograph company, in the Northern part of the United States. On October 14, 1958, Ila gave birth to a set of twins girls: Teresa Bentley, & Patricia Bentley, and in August 31, 1960, a son was born, George Bentley.

Longing to return to Oklahoma, Willis accepted a job in Buffalo, where they moved to raise their children. They began a family business raising hogs, in which they encountered long hard days of working together on the farm. Ila loved sewing, so she began sewing for her family as well as altering items for many others. Ila made numerous prom and bridesmaid dresses as well as the Show Choir costumes for Buffalo High School. In January of 1976, Ila opened her own business called: The Drapery Shop. She designed and made draperies and top treatments in which she hung in many homes and businesses, in the area.  Ila also worked alongside Willis, as they bought homes to remodel as rental properties. After Willis's retirement in 1994, Ila and Willis bought a camper and began traveling. In the heat of the summer, they would go to Sierra Village, New Mexico, and south for the winter to South Padre Island, Texas.  In 1996, Ila began carving beautiful birds, mountain men, walking canes, computer mouse’s and many other items, in which gave her great pleasure. In 1999, Ila also began sewing draperies for Meliza Interiors of Woodward, Oklahoma, in which she retired in 2012. Ila was a member of the Red Hats Club, in which she enjoyed dressing up for their luncheons and outings. She was a member of the Extension Club, and she enjoyed helping with the County Fair. She received many ribbons for entries of her own. Ila formed a special bond with the coffee bunch, as Ila's presence was known with her warm smile. Ila was a member of the First Baptist Church of Buffalo. Ila will be fondly remembered for her many memories of her homemade cinnamon rolls, turtle pancakes, chocolate syrup and mayonnaise cake. The memory of her gentle spirit and contagious smile will keep our hearts joyful. Ila is preceded in death by her parents, Guy and Sophia Redwine, sister, Eva Davis, and the love of her life, Willis Bentley. Ila went to be with the Lord and Savior Tuesday May 29, 2018 at her home in Buffalo, with her family at her bedside. Left to cherish her memory are her three children, Teresa Wheeler and husband Clyde of Laverne, Ok, Patricia Moser and husband Mike of Fort Supply OK, George Bentley and wife Rhonda of Buffalo. Five Grandchildren and nine great grandchildren, Latisha Heinlen and husband Jonathan, Elizabeth, Kate and Scarlett of Oklahoma City, OK., Tyler Ashpaugh and wife Monica, JaeLynn and Jaymin of Milfay, OK.,  Jennifer Wheeler of Woodward, OK, Michelle Mendoza and husband Ryan of Woodward, OK, Kyleigh, Kameron and Lane, Damien, Devon and Dillon and Cody Ashpaugh of Milfay, OK. Two sisters; Evelyn Beck and husband Duane of Albuquerque, Karen Martin and husband Steve, of Terlton, OK.; many nieces, nephews, and friends. Family suggest memorials to the Buffalo First Baptist Church.

To send flowers to the family in memory of Ila Bentley, please visit our flower store.