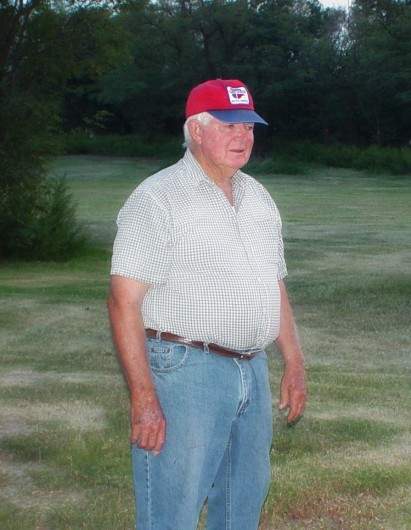 Hugh Eldon (Doc) Fogleman, 89, born on January 19, 1928 to Cloy Cashen and Ethel Ruth (Hersch) Fogleman in Moorehead, Kansas. Hugh attended school in Moorehead where he graduated with the class of 1946. Hugh married Patricia Jean Campbell in 1950 in Independence, Kansas. They were blessed with their son, Paul Eldon in 1957. Hugh served as Corporal in the United States Army with a MASH unit while stationed in Korea. When he returned to Independence, Kansas he led the Church of God and worked at the Coca Cola Company. He graduated from trade school to become an electrician and worked for York Electric. The family moved to Laverne, Oklahoma in 1964 where he was hired by Sinclair Oil and Gas to maintain the first computerized pipeline. In the 1970's, Hugh and Paul started their family business, Fogleman Electric. Hugh resided in the Shattuck Nursing Center in Shattuck, Oklahoma from 2008 until his passing on April 28, 2017. He is preceded in death by his parents, his loving wife, his two brothers, Cloy and Max Fogleman, and his sister, Loris Elmore. He is survived by his son, Paul Fogleman of Laverne, Oklahoma; six grandchildren, and sister, Arlene Tinkle of Kansas.

To send flowers to the family in memory of Hugh Fogleman, please visit our flower store.