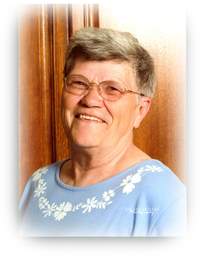 Helena Darlene Smith, a resident of Buffalo was born May 31, 1938 in Hunter, Kansas, to Amy Elvena and Francis Henry Blagrave. Helena married Don Earnest in 1957 at LaCrosse, Kansas; she spent time at home  raising her children. In 1968 Helena married Robert Allen Smith in Carrollton, Kentucky. She worked as a  CNA Nurse Aid for 25 years at the Grace Living Center Buffalo, Oklahoma. Helena also worked at the Harper’s Café and LaMunyon Dairy Boy. Helena enjoyed embroidering, reading, sewing, and quilting. She was a member of United Methodist Church. Helena went to be with the Lord October 20, 2013 at her home in Buffalo, Oklahoma at the age of 75 years, 4 months, and 20 days.   Helena was preceded in death by her parents, sons, David Smith and Timothy Smith; sisters, Mavis Neary, Jean Nabors; brother, Dean and his wife, Jeanie Blagrave.

To send flowers to the family in memory of Helena Smith, please visit our flower store.