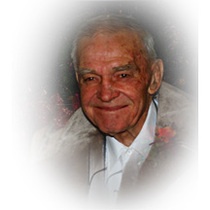 Harold Jay Shuman was the 5 th child of Jay and Maude (Painter) Shuman, he was born on August 22, 1929 on the family farm northwest of Buffalo, Oklahoma.  At the early age of 8 years old, Harold Jay’s brother Robert, sister Ruby, and brother-in-law James Torrence, were killed in a truck wreck east of Buffalo in December 1937.  Ramona daughter of Ruby and James at the age of three months was raised by Jay and Maude.  On May 1, 1938 Jay Shuman drowned in a flash flood leaving 8 years Harold Jay and mother Maude to raise, his niece Ramona.  Harold Jay’s whole world was turned upside down, with making adult decisions to run the family farm.  Harold went to Sunny Slope Country School to the 6 th grade, where he transferred to Buffalo High School.  During Harold Jay’s high school career he played football, basketball, and track.  Harold Jay graduated with the class of 1947.  August 24, 1947 Harold Jay married his high school sweetheart Evelyn Blasdel, and together they purchased their first farm, at the age of 18.  To this union 4 children were born Jacqueline Kay, Shirley Jo, Christie Lee, and Terry Don.  Harold Jay and Evelyn started a business for the ground up in 1960 known as The Dairy Boy then sold it to the LaMunyon’s in 1965.  Harold Jay and Evelyn farmed and ranched side by side, together until Evelyn’s passing in June of 2004.  Harold Jay has been a lifelong member of the Assembly of God Church.  Harold Jay served on many boards over the years including PTA President, Farm Bureau, Church Boards, and the Harper County Community Hospital Board for 29 years.  Harold Jay hobbies were going to auctions whether it was to buy cattle or a bargain.  Harold Jay was preceded in death by his childhood sweetheart, Evelyn; parents, Jay and Maude Shuman; brothers, Robert and Raymond; sisters, Florine, Ruby, and Ramona; brother-in-law, James; infant daughter, Jacqueline; and great grandson, Gavin.  Harold Jay went to be with his Lord and Savior with his family at his bedside, Saturday, May 16, 2015 at the Parkview Pointe Senior Living in Laverne, Oklahoma.  Harold Jay is survived by his daughters, Shirley Waugh and husband Dale of Buffalo, Oklahoma, Christie Nelson and husband Cecil of Cleo Springs, Oklahoma; son Terry Shuman and wife Carla of Rosston, Oklahoma; grandchildren, Misty (Waugh) Appleton and husband Joe of Buffalo, Oklahoma, Lyle (B.B.) Waugh of Sentinel, Oklahoma, Kay (Waugh) Nagle and husband Gary of Burns Flat, Oklahoma, Cynthia (Berends) Bentley and husband Ty of Laverne, Oklahoma, Charley Berends and wife Jenny of Shattuck, Oklahoma, Dandy Shuman and wife Amy of Rosston, Oklahoma. Dylan Shuman of Rosston, Oklahoma, Kandi Shuman of Rosston, Oklahoma; brother-in-law Lonnie Long; very special nephew Justin Long and wife Heidi; 18 great grandchildren, 2 great great grandchildren, many nieces and nephews, numerous of other relatives and friends.

To send flowers to the family in memory of Harold Shuman, please visit our flower store.