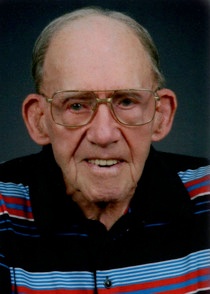 Guy Wesley Randolph, son of Roy Ralph (Hook) & Martha Mills (Mattie) Randolph, was born on January 16, 1925 on the family farm home north of Buffalo, in the small community of Little, Oklahoma. Guy was one of four children born to this marriage and lived there until approximately the age of 8, when the family moved to the town of Buffalo.

Guy graduated from the Buffalo High School with the Class of 1943.  After graduating from high school, on November 17, 1943, Guy enlisted in the United State Army during World War II. During his service he was in the battle of Rhineland in Central Europe as Technician Fifth Grade of Company C 701 st Tank Battalion. Guy received his honorable discharge on May 6, 1946. After returning from active duty Guy attended Business School where Guy attained his education in Accounting.  On Aug. 16, 1948, Guy was united in marriage to Vada Jean Etherton of Buffalo for 16 years with three children, Ricky V., Judith Ann and Tamara Joe being born to this union. Guy was employed at the Buffalo Cooperative Elevator, Buffalo Feedlot & served as County Assessor. Besides loving his televised sports his absolute favorite sport was playing golf.

On July 25, 1964, Guy was united in marriage to Sylvia Maxine (Rasmussen) Peterson at Topeka, KS with one child, Larry Dean being born to this union.  For 27 years they, along with Sylvia’s three girls, Nina, Nancy and Lisa from a previous marriage, continued to live and raise their family in Buffalo.  Guy lost Sylvia to cancer in 1991.

Guy, later, re-kindled a friendship with Dorothy June Bates of Buffalo from their high school days. Guy & June were classmates and were the Buffalo High School Football King & Queen from 1943. Guy and June continued their friendship for many years going to sport activities and Friday night dancing.  Guy continued living at his home in Buffalo until his health began failing him in the fall of 2014 at this time he moved to the VA Center located in Norman, OK. Guy was preceded in death by his wife Sylvia, his parents, and three brothers Harry, Joe, and Ray Randolph and life time friend June Bates.  Guy left his earthly home on February 26, 2014, at the age of 90 years, 1 month, and 11 days, at the Norman Regional Hospital, Norman, Oklahoma.

Please click here to view the video tribute
To send flowers to the family in memory of Guy Randolph, please visit our flower store.