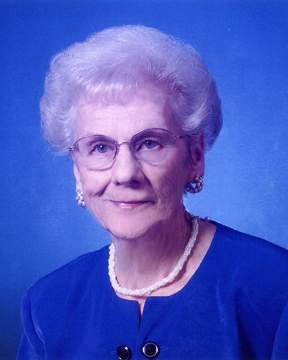 Geneveive (Birkle) Powell was born June 23, 1931 to Carl and Mary (Miller) Birkle on the family farm near Gate, Oklahoma. Geneveive went to be with her Lord and Savior on May 6, 2017 following a lengthy illness. She was the second of five children. At an early age Geneveive and the family moved to the farm north of Rosston, Oklahoma and has lived there her entire life. She attended the Rosston Schools and graduated with the class of 1949. She assisted with the school newspaper, was treasurer of her senior class and active in her church. Geneveive was a star basketball player. The “Flying Redheads”, a professional women’s basketball team offered her a spot on their team, by this time she had met Marton Lee Powell and that’s where her heart remained. On June 29, 1951 they were united in marriage at Clayton, New Mexico and together they raised three (in her own words) of “Gods greatest gifts” their children. When Lee finished his military services, Vee supported Lee’s lifelong career, as a horseman, blacksmith, owner and trainer in the world of thoroughbred horse racing. She was a devoted wife, mother and meticulous homemaker; creative and skillful seamstress making most of the family’s wearing apparel for many years. Geneveive loved flowers and enjoyed various crafts and demonstrated her talents in creating many useful and decorative items for her home and gifts for others. Well known for her cooking, baking abilities, she shared the results with many over the years. Geneveive went to EMT training classes and became an EMT – mostly to be able to care for her family in case of Emergency. She was a faithful Christian woman and a lifelong member of the Rosston United Methodist Church, where she was an active teacher, participant in church functions & community services, guiding her family in the Christian way. Geneveive was preceded in death by her loving husband Lee, her parents, one brother Carl Birkle Jr.; two sisters Leah Magdalena and Marian Krueger; and a brother-in-law Buck Powell. Left to celebrate her life and memory while mourning the loss of her presence her son Marton Lee Powell Jr. “Marty”  and wife Virginia of Eureka, Kansas; two daughters Brenda Cullins of Rosston, Oklahoma, Karlinda Olmstead and husband Billy of Buffalo, Oklahoma. Grandchildren Larissa Wells and husband Josh, Adam and wife Mackenzie Olmstead; Mary Olmstead Great Grandchildren Tanner, Taylor and Tyler Wells; Braxton, Titus and Hunter Olmstead, five brother-in-law Jack Powell, Dick & Joy Powell, Max & Carol Powell, Tuffy & Sidney Powell, Pat & Annie Powell and a Sister-in-law Pauline Todd,  many nieces nephews, cousins in-laws and many friends and neighbors.

To send flowers to the family in memory of Geneveive Powell, please visit our flower store.