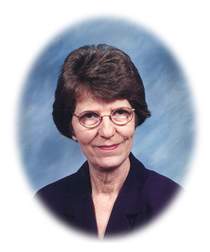 Gayle (Judy) Maxine Crowl Harper was born north of Butler, Oklahoma, April 21, 1937, to David Othal Crowl and Ila Pearl Gregory Crowl Dennis. Judy grew up in Northwest Oklahoma. She attended Butler Grade School and Buffalo, Rosston, and Fargo High Schools (graduating in 1955). While in high school, Judy enjoyed playing basketball and being around her friends. On July 22, 1956, Judy and Gene Edward Harper eloped to Arnett, Oklahoma, and were married by Minister O.E. Weeks, a friend of the family. To this union two children were born, Greg and Patti.

Judy served in a multitude of occupations ranging from working at Harper’s Café, which she helped run alongside her husband, his brother, and his brother’s wife, and Secretary at First Baptist Church, Buffalo. In addition to being a working wife and mother, she volunteered in numerous community projects, including assisting with youth sports, singing in community Christmas cantata, serving on the Buffalo Veterans’ Memorial committee and the Buffalo Public Library Board as well as being a member of the Oklahoma Home Community and Education club. She had a plethora of hobbies and interests, such as antiquing, restoring old furniture, painting, canning food, quilting, playing bridge, gardening, and watching sports, especially basketball, no matter who was playing. She was also a member of the First Baptist Church Buffalo, Bowling League, and Buffalo Chamber of Commerce. And, probably more than anything, she enjoyed spending time with her family and friends.

She was preceded in death by her husband, Gene Harper, by her parents, Othal Crowl and Ila Gregory Dennis; daughter-in-law Susan Harper; brother Jesse Crowl; sister-in-law Jauqita Harper. Judy went to be with her Lord and Survivor on Thursday, February 19, 2015.

Please click here to view the video tribute
To send flowers to the family in memory of Gayle (Judy) Harper, please visit our flower store.