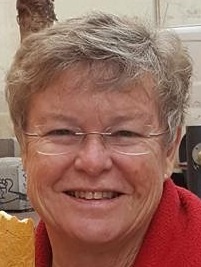 Gayla passed on from this life on March 6, 2017 six days short of her 62nd birthday. Gayla was raised on the family farm east of Buffalo and learned at an early age how to work hard caring for animals and driving trucks and tractors. Gayla began school in Selman, OK transferring to Buffalo as they closed the school at Selman. She graduated with the class of 1973 from Buffalo High School. She went on to college at NWOSU obtaining her B.S. and M.S. degrees. She eventually went on to get her Ph.D. at OSU. Gayla was united in marriage to Laurence Jordan on May 30, 1996. Gayla devoted 30 years of her teaching career to the accounting department at NWOSU with an admiration from her students majoring in accounting and a dread to those that only took her class because they had to fill a requirement. Weekends would always draw Gayla back to the farm as her passion for farm life never faltered. She maintained that passion proving that you can take the girl out of the farm but you can’t take the farm out of the girl. She proved this fact as she did indeed die with her boots on. Gayla loved to travel. She hosted international trips taking groups overseas while she was at NWOSU. She started a tradition of the annual Blasdel family ski trip to Colorado that continued for many years.  Gayla and Laurence became addicted to traveling, going to exotic locations and on cruises. Gayla finally took her retirement from teaching so she could move back home to provide in home care for her mother. Even after Ruth was moved into Grace Living Center in Buffalo, Gayla was there every day to care for her. Gayla was currently involved with the Grow and Share club in Alva, OK and a member of the Buffalo Library Board. Her hobbies included photography, and entering pictures and floral arrangements in the county fair. Gayla’s final passion was devoting her life to her grandchildren. Gayla was baptized at an early age and became a member of the First Christian Church of Buffalo. Gayla was preceded in death by an infant brother Bart and her parents. She is survived by her husband of 20 years, Laurence Jordan, two sons, Calvin Jordan and wife Malissa, and Carson Jordan, two brothers, Bryce, and Brad and wife Kandi, Brandi, Bert, and Anna Blasdel, and her grandchildren. She leaves behind other relatives, and friends.

“Blessed are they that mourn, for they shall be comforted” (Matthew 5:4)

To send flowers to the family in memory of Gayla Jordan, please visit our flower store.