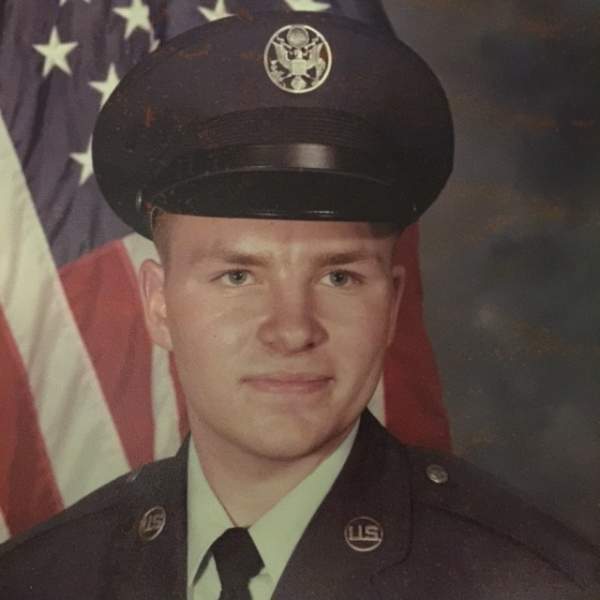 Francis Eugene McGough was born to Gene and Olive McGough on August 6, 1959 in Buffalo, OK. He weighed in at a whopping 2 lbs 14 oz.  He started his life with little hope of surviving at that weight. Well, Frank was a fighter and he fought hard to survive and so began his life. Frank attended Buffalo Public Schools from first grade through his Senior Graduation in 1977. He loved sports and he was trainer/assistant to most all of the sports teams at Buffalo Jr/Sr High School.  I am sure many will remember at one of the basketball tournaments when he was rolling out the cart of basket balls and the wheel broke and basketballs rolled everywhere. Everyone in the gym was clapping and laughing and Frank took a bow and gathered up all the balls. From the age of 7 or 8 many Thanksgiving Dinners were eaten while watching the OU/Texas game on television.  Sooner Nation was highly important to him. He was probably their number one supporter-win or lose. December 26, 1978, Frank entered his Military career in the United State Air Force Firefighter, starting at Chanute, IL. Air Force Base, then stationed at Woodbridge Air Force Base, England; then at McConnel Air Force Base, Kansas.  Frank and Esther Beam were united in married at Laughlin Air Force Base, Texas.  To this union two children were born son, Greg and daughter, Danielle.  Frank continue to serve his county at Edward Air Force Base, California; Torrejon Air Force Base, Spain, and ooo-Boy was his mother Olive very proud of that her son touring the world. Travis Air Force Base, California; Frank retired from the United State Air Force in 1994, with a list of medals includes outstanding unit award with 4 Bronze Oak Leaf Cluster; Good Conduct medal with 4 Bronze OLCS; National Defense Service Medal; Southwest Asia Service medal with 3 Bronze Stars; Overseas Ribbion-Long with 1 Bronze OLC; 2 Bronze OLC, training ribbon Kuwait Liberation Medal Service in Desert Shield Storm. Frank was proud that he served in the Gulf War-Desert Shield/Desert Storm where he was a Fireman/Paramedic. Frank broke his ankle, while running when he fell into one of those big spider holes in the sand. He was able to continue his work there even with the broken ankle. He retired with an Honorable Discharge due to many health problems after serving in the Gulf War. Frank and his family setup home at Phoenix, Arizona, where he worked for Total Events, management doing security and scheduling, Contemporary Service doing security work, TSA at the Phoenix International Airport for several years before being transferred to Oklahoma City where he retired. But did not stop working, Frank worked as maintenance personal and security for apartment building in Oklahoma City and worked at the Republic Parking Garage in Downtown Oklahoma City, for several years. Do to health problems Frank finely retired living at his house in Oklahoma City and keep occupied doing thing around house and the neighborhood. He was also a fan of NASCAR-especially Jeff Gordon #24.  He probably never missed watching one of the races. And he had said "It just won't be the same without Jeff."  Well, life won't be the same without Frank. Franks father and mother preceded him in death, respectively in 1963 and 1992. Frank enjoyed the time spent with his grandchildren and nieces, nephews, Aunt & Uncle. Frank had always said he hoped when it was his time he would just go to sleep.  Thursday, Oct. 12, 2016 would have been his mother's 100th birthday. Frank went to sleep and joined his mother and father.  Frank is survived by his daughter, Danielle Jackson and husband, Thomas. Two granddaughters, Jada and Jaylynn and one grandson, Leigh; his son, Greg McGough, and Esther McGough, mother of his children. Two sisters, Toni McGough Mounce and Jackie and husband Roger Stafford, his brother, Bill Colby. Many nieces, nephews, grand nieces and grand nephews as well as numerous friends, including Nikki J, a treasured friend of his and little Zoe his beloved best pal.

To send flowers to the family in memory of Frank McGough, please visit our flower store.