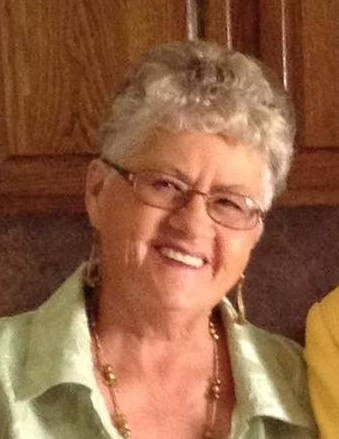 Faye was born September 12th, 1943 at Englewood, KS to Albert T and Bessie (Phillips) Smith as the youngest of 3 children.  She later attended school in Englewood, KS.  On October 22nd, 1959, she married Forrest Lee Ediger.  The couple made their home in Salina, KS for 3 months and then moved back to the Southwest Kansas area. They moved to their current home in 1985 where they have hosted many family gatherings with their ever-growing family.

Faye was a homemaker and farmhand to Frosty. She also worked as a clerk for Fishers IGA and Les Moore’s Jack & Jill for many years.  Faye enjoyed reading, gardening, sewing (especially shirts for Frosty,) cooking for Grandsons, taking the occasional trip to see new places with her cousin Jack Olmstead and wife Kate, along with Frosty and her sister Betty, and talking on the phone daily to her best friend of 70 years, Carol Woodruff.  Faye loved serving the church in the nursery and helping with meals, opening her home to care for and watch over numerous kids of friends and family throughout the years. Faye particularly loved spending time with Grandkids and Great Grandkids.   Faye was a wonderful wife, mother, sister, aunt, Grandmother, and friend who was always full of love and had a smile and a kind word for everyone.  Her cooking, laughter, hugs, advice, and spirit will be deeply missed by family, close friends, and all who knew her.     Faye is preceded in death by her parents Albert and Bessie Smith, a brother Bill Smith, and her son Doug Ediger.  Faye Ann (Smith) Ediger, age 76 of Englewood, Kansas, went to be with her Lord and Savior on Monday evening, December 2, 2019 in Hays, Kansas.    Faye is survived by her husband, Forrest (Frosty) Ediger, her children Tamera Seacat and husband Bill of Ashland, KS; Janet Smith and husband Allen of Davenport, OK; Brian Ediger and wife Pam of Minneola, KS; Sister Betty Burgess of Midwest City, OK; Grandchildren Daniel Seacat and wife Kristi of Park City, KS; Jacob Smith and wife Desiree of Madill, OK; Darin Seacat and wife Jeanette of Ashland, KS; Becky Clark and husband Nathan of Las Vegas, NV; Dustin Seacat and wife Kelli of Gage, OK; Ethan Ediger and wife Aubrey of Minneola, KS; Quentin Ediger and Marlee McKenna of Minneola, KS; and Layton Ediger of Minneola, KS. Great Grandchildren Andilyse Clark, Danni Smith, Jordan Seacat, Presley Seacat, Jorji Smith, Logan Seacat, Molli Smith, Carter Clark, Maci Seacat, Olivia Seacat, Ember Seacat, River Seacat, Brigham Ediger, Easton Seacat, and Koen Ediger, along with many other beloved family members and friends. The family would like to express their deepest gratitude for all, of the calls, texts, messages, visits, meals, prayers and support during the stay in the hospital and after her passing.  In lieu of flowers, donations can be made to Minneola District Hospital.

To send flowers to the family in memory of Faye Ediger, please visit our flower store.