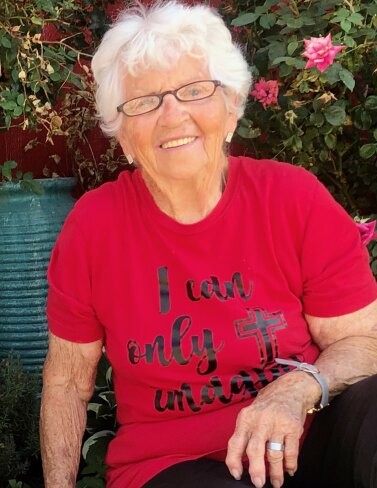 Esther Lavon (Hada) Irion was born to Frank Kalman and Faye Ethel (Sheddy) Hada on June 24, 1934, in Alva Oklahoma and was called home by her Lord and Savior on Dec. 4, 2021.     Esther spent her childhood on the family farm in rural Woods County where she attended the Webber Country School and spent her teen years in Alva where she graduated as an Alva High School Goldbug with the class of 1952.       Esther met the love of her life, Charles Irion, at the car races in Alva.  Esther and Charles were married a short time later in Buffalo, OK on Jan. 31, 1953.  Esther and Charles spent a short time in Alaska while Charles was serving in the Military. During this time Kathy, the first of their four blessings arrived, shortly after returning to Buffalo Oklahoma came Terri, Linda, and Rick.      Esther spent her young married life as a stay-at-home mom taking care of her children and providing childcare for other children.  After all her children were off to school Esther began working for Dr. Dean Conklin Chiropractic Office in Buffalo.  Then she began her job at Northwestern Electric in Buffalo where she retired from after 26 years. After a little time in retirement, she worked part time in the kitchen at the Harper County Community Hospital.      Esther spent her retirement years busy as ever doing the things she loved. If she wasn’t spending time with her family, enjoying a cup of coffee with friends at the diner, working in her yard, helping with Team kids at the Baptist Church, you might get lucky enough to catch her at home in front of the sewing machine making a new quilt or an entry for the Harper Co Fair. Esther was a die-hard Oklahoma Thunder Fan and if they were playing, she was more than likely found, with her popcorn and Dr. Pepper, cheering them on with her friend Dovie Farmer.      Esther was a member of the First Baptist Church of Buffalo, Harper County OHCE, and The Buffalo Red Hat Ladies.      Esther was preceded in the death by her husband Charles Irion, parents Kalman and Faye Hada, sister Elaine Trekell and brother Kalman Hada Jr.      She is survived by her children, Kathy & David Masoner of Fort Worth, TX., Terri and R.L. Moore of West Monroe LA., Linda & Jerald Hughes of Enid, OK., Rick and Dani Irion of Buffalo, OK.  Eight grandchildren, Nicole (Gary) Benavides, Lacie Huckaby, KD Masoner, Arica (Charlie) Lingerfelt, Natalie Moore, Shawn (Angie) Hughes, Linaka (Buddy) Probst, Vanna (Trey) Irion. Fourteen great-grandchildren, Chassady, Carissa and Christopher Pauda, Cody, Caden and Jaden Huckaby, Morgan and Molly Lingerfelt, Emme Hughes, Blakelea and Bentley Probst, and Stetson, Baylor and Brexlee Jones.  Two great great-grandchildren Julian and Maddux Pauda.

To send flowers to the family in memory of Esther Irion, please visit our flower store.