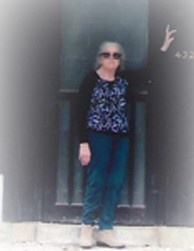 Ellen Doreen (Gettle) Mayfield, was born to Burnis Gettle & Billie Doreen (Cooprider) on June 25, 1947 in Higgins Texas. Doreen was raised by her mother Helen Cooprider, on the farm in Ellis County. Doreen graduated from the Arnett High School. She met the love of her life Kenneth Mayfield, and they were united in marriage on June 27, 1965. They made their home on the family farm, and to this union two daughters were born Diana and Debbie. Doreen helped Kenneth work the farm raising rabbits, feeding the farm animals and driving the hay truck while Kenneth was stacking hay, and helped Kenneth with auto repairs.  She enjoyed taking the girls on their school activities and band trips. Doreen and Kenneth took care of the Legion Dances, loved to go camping with the family, also enjoyed embroidery, and playing cards with Jim & Joann. Doreen was preceded in death by her parents and her mother, Helen; husband, Kenneth; 4 brother –in-laws.  Doreen left her earthly home on April 17, 2019 at Shattuck, Oklahoma.  Doreen is survived by her two daughters Diana Kraus and husband Rickey, of the home, Debbie Taylor of Gage, Oklahoma. 4 sister in laws, 5 grandchildren Tyler Chase of Arnett, Oklahoma. Jared Chase and wife Morgan of Cordell, Oklahoma, Darwan Tolle Jr. and wife Krystal of Buffalo, Oklahoma, Joe Tolle and Alexis Finn of Woodward, Oklahoma, Dora Wells and husband Jessie of Woodward, Oklahoma; 12 Great-grandchildren, 5 Great-Great Grandchildren, many family and friends.

To send flowers to the family in memory of Ellen Mayfield, please visit our flower store.