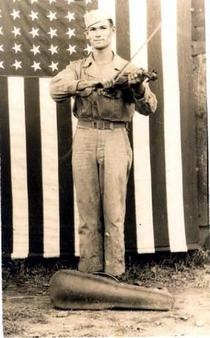 Dwayne W. Richardson was born on the family farm west of Buffalo on February 2, 1923 to Walter and Ruth (Price) Richardson. Dwayne attended the Wayside Country School through the eighth grade and graduated from the Buffalo High School with the class of 1942. After high school he joined the United States Army during WWII. While serving his country he received numerous awards including a Purple Heart, Good Conduct Medal, World War II Victory Ribbon, American Theater Ribbon, EAME Theater Ribbon and Four Bronze Service Stars, during the Battles and Campaigns at Normandy, Rhineland, Northern France, and Central Europe. On December 8, 1945 Dwayne received an Honorable Discharged, Private First Class, Company B 175 th Infantry, of the United States Army. Dwayne returned home and married Joann Levings on December 27 , 1947. They had four children Joseph (Rusty), Ruth, Judy, and Richard. Dwayne worked on the farm, later worked at the Harper County Court House and then moved out to the Oklahoma Highway Department Division #6 where he was a heavy equipment operator. Dwayne retired in 1985. Dwayne enjoyed playing all stringed instrument and was in a band that played at numerous places throughout the area. He was also active in the Laverne & Buffalo American Legion Post 237 Military Honor Guard. He enjoyed going out and looking for Arrowheads in the country or just taking a long walk. Dwayne was preceded in death by his parents; his infant son Richard; his siblings Jess Richardson, Eunice Hargus, Merlin Richardson and Lela Love; his wife Joann Levings Richardson. Dwayne left his earthy home on January 28, 2015 at his home, with his son Rusty and nurse of Faith Hospice by his bedside. Dwayne sense of humor will be greatly missed. Dwayne is survived by his children Rusty, Ruth, and Judy; his brother Don Richardson; Six grandchildren; seventeen great grandchildren; two great-great grandchildren; other relatives and many friends.

Please click here to view the video tribute
To send flowers to the family in memory of Dwanye Richardson, please visit our flower store.