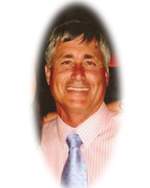 Doug attended the country school of Paruna located North of Buffalo until 5 th grade and then graduated from Buffalo High School as salutatorian in May 1975 with a 4.0 grade average. While in school he participated in basketball, football, track, FFA, and FCA. Doug then attended Oklahoma State University, pledged Alpha Gamma Rho fraternity, and later attended Northwestern Oklahoma State University.

He was united in marriage to Pamela Sue Beck on June 3, 1978, and together they raised three children: Shane Leroy, Devin Rea, and Kyndell Denise.

While Doug enjoyed his life as a farmer and doing precision dirt work, he also loved OSU football and tail gating with his family and friends. Most important to Doug was his time spent with grandchildren pushing them in a stroller around the neighborhood or having them ride with him in his tractor as his own children often had done. Always a good neighbor, Doug enjoyed time spent with his many friends, but nothing was as special as the time he spent with Pam just sitting on their porch enjoying each other’s company.

Doug served the on the Buffalo school board for eleven years. He was also I licensed abstractor and member of Oklahoma Land Title Association. He was a member of the First Christian Church of Buffalo, and he was baptized September 2008.

Doug is survived by his wife Pam of the home; son Shane, wife MacKenzie, and 5 month old grandson Kreighton Douglas of Enid; son Devin, wife Katherine, and 11 month old grandson Zachary Logan of Buffalo; and daughter Kyndell Denise currently of St. Kitts, West Indies. Doug leaves behind his parents, John and Rita Weder and his “favorite mother & father-in-law” Ilomae and Glen Beck, all of Buffalo, sister Deborah and husband Jim London of Freedom, OK; brother Tommy and wife Shaylyn and sister Jo and husband Randy Dolin of Buffalo, OK; sister-in-law, Glenda Mittasch and husband Denny of Morrison, OK; and Janet and Dr. Brent Steffen of Kearney, NE. Doug loved his many nieces, nephews, and all their families along with his aunts, uncles, and cousins that have survived him. He was preceded in death by his grandparents, John and Gertrude Weder, Louis and Dorothy Allison, and several uncles and aunts he shared many special memories with.

Please click here to view the video tribute
To send flowers to the family in memory of Douglas Weder, please visit our flower store.