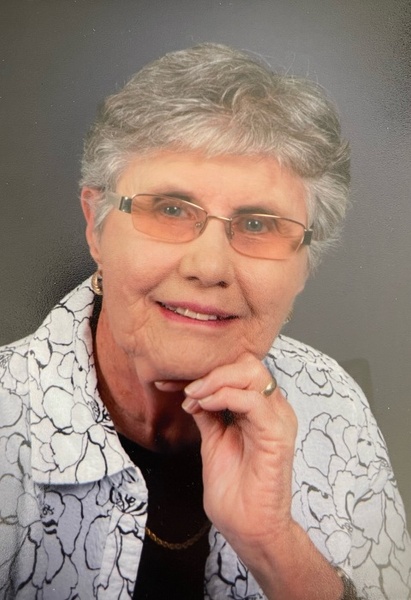 Dorothy’s parents were Wayne and Florence (Odell) Lipsey. She graduated from Buffalo High School. While in school, she won a trip to Washington DC from a scrap metal drive to help with the war efforts during World War II. While there, she helped Mrs. Will Rogers christen the newly commissioned ship USS Will Rogers. She also got to meet Irving Berlin and Eleanor Roosevelt. After high school, she graduated from Northwestern State University at Alva with a BS in Art. While there, she met the love of her life, Robert Dale Gates. They were married March 18, 1953 in Clayton, New Mexico. To this union, four children were born: Steve, twins Dale and Diane, and Joy. Bob and Dorothy said their marriage of 68 years was full of love and respect for each other. Later in life, Bob and Dorothy enjoyed taking trips with their camping trailer. They traveled over much of the United States and there was always something else to see.

Dorothy was a member of the United Methodist Church her entire life. She served many years as a Sunday School Teacher and Superintendent. She also served as the Vacation Bible School Superintendent and Teacher. For most of her life, Dorothy was a part of the Methodist Women’s Group that prepared many funeral dinners for grieving families. Dorothy shared many happy memories of her family attending and helping with different church activities. Dorothy was well known for making tons and tons of noodles for homecomings. One memory that stands out are the countless gallon cans of cookies prepared for our troops serving in Vietnam.

Another memory shared by many community members was the snow storm of 1971. Dorothy opened her home to a Boy Scout Troop with 10 members, and 2 couples from Laverne that were stranded and walked in. They were there for 5 days and no one went hungry.

After her children were graduated from school, Dorothy went back to college and renewed her teaching credentials. She went on to teach high school art classes at Buffalo for most of the 1980s and was voted as Teacher of the Year. As a teacher, she found it most rewarding working with students to develop their skills and seeing them grow their talents. Many of her students won awards entering their art at the Harper County Fair, the Oklahoma State Fair, and many art shows all over the state of Oklahoma. Dorothy served many years as a Harper County Fair Superintendent. She served 2 years as Regent in the Daughters of the American Revolution. She was a member of the Retired Teachers Association, Library Club, and the Plains Indians and Pioneer Museum at Woodward. After retirement, she worked for a year at the Northwest Domestic Crisis Shelter at Woodward. Dorothy was also part of the Panhandle Nutrition Services for 3 years. Family was always the center of Dorothy’s life. Helping with 4-H and FFA projects and activities was always rewarding. She took great joy in watching her children and grandchildren grow. Education was so important to Dorothy and seeing all 4 of her children graduate from college was a priority which brought much happiness. As an artist, Dorothy enjoyed entering art contests and she was especially thrilled with winning 1st place at the Western Heritage Art Museum photography contest this past fall. Most important was painting for family and friends. For years, every member of her family received a hand-painted Christmas card of nature and farm scenes. She also enjoyed quilting and made quilts for all of her family. Each brush stroke and each stitch was made with love. Dorothy was preceded in death by her parents and her husband. Dorothy is survived by her children, Steve and Mary Gates of Oklahoma City; Dale and Juanita Gates of Enid; Diane and Fred Fernandez of Wichita; Joy and Larry Jeffers of Oklahoma City; eleven grandchildren (Darreld, Danial, Aryan, Brenden, Katy, Clint, Vernon, Kristine, Sarah, Rachel, David) and numerous great-grandchildren.

To send flowers to the family in memory of Dorothy Gates, please visit our flower store.