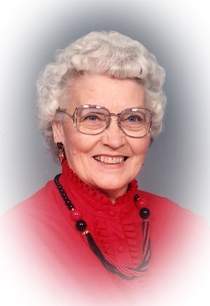 Dorothy June Bates, was born in the Kibby Community south of Buffalo, Oklahoma to George and Evelyn (Dickinson) Pauls. June grew up in the Harper County and graduated from the Buffalo High School with the class of 1943. June married Merle “Bucky” Bates at Woodward, Oklahoma on August 25, 1943 and to this union 2 children were born Aaron and Jan. The family made their home on a farm in the Willard community area just north of Buffalo. June worked on the farm and in the 50’s and 60’s she was worked at the Thompson’s Grocery; Harper’s Café; the Selective Service; Purdum’s Department Store; Ideal Grocery; and the Buffalo Livestock Auction. June was elected to the Harper County Treasurer Office after Bucky passed on June 4, 1972. June remained treasurer for 17 years before she retired in 1989. June kept operating the farm with the help of their farmhand Larry Haydock for many years. June spent her retirement years living in Ashland, Kansas and in Buffalo, Oklahoma. June and Guy Randolph enjoyed going to dances all over the area. June was active with the St. Joseph Catholic Women’s Club, Altar Society, and the Oklahoma State Treasurer Assoc. June was very active with the Buffalo Alumni Association. June enjoyed traveling to the grandkids sports events and other activities they were involved in. June went to be with her heavenly father on January 20, 2014, at the age of 88 years, 7 months, and 7 days. June was preceded in death by her parents and husband Bucky and her two sisters “Moon” Emma Caroline Deines and Betty Mae Bartel. She is survived by her son Aaron Bates  of  Mooreland, Oklahoma;  Jan & husband Marvin Wilkinson of Buffalo, Oklahoma; a brother George Pauls Jr. of Salina, Kansas; 10 grandchildren 16 great grandchildren; 9 great-great grandchildren, nieces nephews and a very dear companion and friend Guy Randolph of Buffalo, Oklahoma, other relatives, and many many more friends.

Please click here to view the video tribute
To send flowers to the family in memory of Dorothy Bates, please visit our flower store.