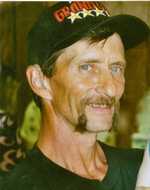 Charles “Chuck” G. Crouch Jr. born February 18, 1957 in Albany, New York to Charles G. Sr. and Glenda R (Marcs). Chuck attended the Albany Schools. On November 10, 1973 Roberta and Charles Crouch were united in marriage at Cortland New York; to this union 4 children were born 3 sons Robert, Mike, Brian, and 1 daughter Karen. The family moved to Buffalo, Oklahoma in 1980 to raise their children. Chuck worked at different jobs to provide for his family. Chuck worked at the Cotters Oil Company for 25 years, serving as a gas attendant, oil changing and fixing farm and tractor tires at many local farms. Chuck enjoyed hunting, fishing, gardening, cooking, but his favorite activity was playing with his grandchildren.  The Grandkids called him “Pops” or “Half Pint” they were his whole world, as he spoiled them rotten.  Chuck always did his best to help his children when ever they need his help.  Chuck spent the last few years taking care of his loving wife Roberta.  Chuck had a big heart with a gentle nature, that will never be forgotten Chuck went to be with the Lord Monday April 15, 2013 in his home at the age of 56.  Chuck was preceded in death by his parents one sister Kathy and loving wife Roberta March 7, 2013. He leaves as his survivors, sons Robert Crouch, Mike & wife Crystal Crouch, Brian & Rebecca Crouch, and daughter Karen Crouch, two brothers and one sister, of New York; 6 Grandchildren, Ashley, Cameron, Aaron, Abby, Kimberly, Madison, Brandon, and Gabriel, other relatives and many friends.

To send flowers to the family in memory of Charles "Chuck" Crouch Jr., please visit our flower store.