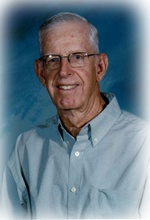 Carroll Edwin Jones was born on July 11, 1932 in May, Oklahoma to Clarence Everett and Alma Vernon (Wilson) Jones.  Carroll attended May schools until he graduated as the only boy in his class with the Class of 1950.  He was a stand-out athlete in both basketball and baseball.  He even carried his love of sports into his adult life playing “Town Team” fastpitch softball as a pitcher.  Carroll was united in marriage to the love of his life, Darlene Ashlock, on November 5, 1952.  To this union three children were born, Kathy, Randy, and Terry. Carroll was employed at B Line Construction, in OKC until his induction into the U.S. Army in 1952, where he served his country in the Korean War as a Corporal and radio man.  Upon his return in 1954 he was employed with the Oklahoma Department of Transportation, Division 6 in Buffalo until his retirement. He worked as a mechanic at Earl Duble Ford, than in 1996, became a bus driver/maintenance man for Buffalo Public Schools until he retired in 2011. Carroll was an avid OU fan and was also a big fan of the Atlanta Braves, and San Francisco 49ers.  He liked OSU too, as long as they weren’t playing OU!  He enjoyed fishing, camping, playing his guitar and singing with his family gospel group The Jones Family, and spending time with his grandkids and great-grandkids, and was excited to know there was going to be one more grandchild coming. He was a member of the First United Methodist Church and served on several committees for the church as well as help serve at various church related functions. He also was a member of the church choir. Carroll Jones, 80 year old Buffalo resident went to be with his Lord, December 6, 2012 in his home after a brief battle with cancer. He was preceded in death both of his parents, Clarence and Alma Jones, a grandson, Nickalus Ray Jones, two brothers-in-law, E.G. Smith and Earl Duble, and two infant nephews. Carroll is survived by his wife, Darlene of the home, daughter, Kathy and husband Roger Summars of Buffalo, Ok, sons, Randy and wife Grace Jones, of Providence Village, Tx, and Terry and wife Connie Jones of Woodward, Ok., one brother, Lennes and wife Alice Jones, Buffalo, Ok., and sister Earlene Nielsen, Buffalo, Ok., 6 grandkids, 12 great-grandkids, lots of nieces, nephews and a host of friends.

To send flowers to the family in memory of Carroll Jones, please visit our flower store.